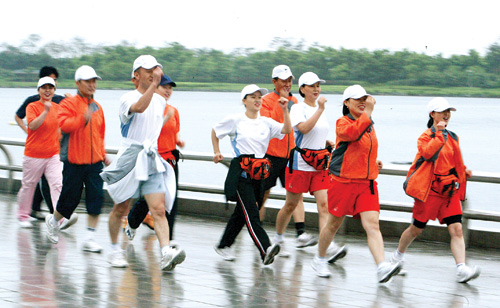 
Hwang Dong-yeol, 41, decided his shoes were made for walking after he was diagnosed with weight-related hypertension last November. The basic fact was that he had become chubby and needed to lose weight or die young.
Hwang was an employee at an information and technology firm in Seoul and he used to sit all day in his office, staring at a computer monitor. This sedentary lifestyle forced his weight up to 101 kilograms.
Hwang chose walking as a way to lose weight and began a 10-kilometer daily journey on foot from his home in Bongcheon-dong to his office in Yeouido.
As a result he lost 31 kilograms in just three months. He recently had to buy 12 new pairs of trousers because his waist line had shrunk by ten inches.
“Walking saved my life,’’ said Hwang. “Walking has given me new energy. I don’t let exhaust fumes from cars or the odors in underpasses stop me walking.’’
Hwang said he sold the car he had driven for the past 13 years because it might have tempted him to stop walking.
“My family members are very happy about the change I have been through,’’ he said. “They used to worry about me whenever they heard about somebody dying in their 40s. Now they don’t.’’
Either for health or just for fun, millions of Koreans have joined Hwang to make walking one of the fastest growing nationwide trends.
This year alone, around 300 walking events have been arranged across the country. Shelves in major bookstores are filled with books about walking. Travel agencies have launched a series of packages that include recommended places for walking.
The Korea Walking Science Association, with a membership that includes around 100 sports education and medical professors, says there are now more than two million Korean adults who walk for more than half an hour at least three times a week.
Lee Kang-ok, a Sangji University professor and the executive director of the Korea Walking Federation, says more people enjoy walking in Korea than anywhere else in the world.
“It was around 2000 when a large number of Koreans seemed to realize the medical benefits of walking,’’ he said. “Korea is one of the few countries where walking has become a nationwide pursuit over a relatively a short period of time.’’ 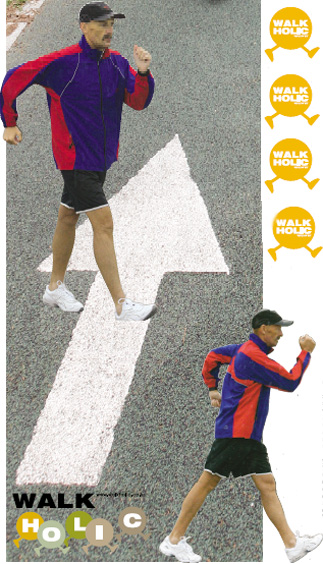 The popularity of walking was boosted by the fact that it’s not a solitary pursuit.
Walkers began to gather together online and offline, making it a social affair.
At major local portal sites such as Daum and Naver there are around 500 private walking clubs, ranging in memberships from 10 to over 10,000.
One of the clubs is called the Naver Walking Club and it has attracted some 1,700 members in just one year since its foundation, and it still brings in an average of 20 new members per day.
Sin Pil-yeol, 43, the representative of the club, said he didn’t think the club would grow so big when he founded it to relieve the stress of losing his job.
“Some say they want to learn about walking,’’ he said. “Beginners can learn about the correct posture for walking as well as the recommended walking courses. But many others come here to have some company when they walk. They tend to walk further and they enjoy it more if they have others to talk to.”
Jung Gwang-jin, 60, said he has walked over 1,500 kilometers since joining the club in February, an average of 20 kilometers per day. He began to walk on the advice of his doctor, who was treating his diabetes.
“It was not easy to go more than 5 kilometers a day when I walked alone, but when I was walking with others I found that I could keep going,’’ Jung said. “Sometimes, I feel like stopping after walking for a while, but when I see the other club members keep going, showing no sign of fatigue, I am encouraged and challenged to walk further.’’
Aware of the public desire to walk and walkings beneficial effects, a total of 235 state-funded medical service centers in cities and counties across the country are also providing their residents with a joint walking program.
Places for walking are not confined to streets in neighborhoods or urban roads.
More and more walking clubs are taking their members to famous cultural sites or places famous for beautiful scenery.
Yesterday, 40 members of an online club called Walking Around the World took a 10-kilometer walk through Mungyeong Saejae, a provincial park in North Gyeongsang. The head of the club is Hwang Gyu-seok, 38. He has surveyed the history and sagas of the region and he shared his knowledge with other members during the event.
“Walking is good for the heath, but it’s also useful for learning and experiencing the culture and history of a region,’’ Hwang said. Early this year, the club members also visited Seomjin-river, South Jeolla, Hwaseong Fortress in Suwon, Gyeonggi and Heiri Village in Paju, Gyeonggi.
Other famous spots for walking include old Joseon-era streets in Hwanghak-dong in northern Seoul;, the roads around the four major gates in central Seoul, also built during the Joseon Dynasty; cultural heritage sites in the old Silla-kingdom capital of Gyeongju, South Gyeongsang; and Nam-river and Jinyangho-lake in Jinju, South Gyeongsang.
Some of those who love walking even go overseas for a stroll.
Eight members of the club known as A Walking Journey to Find Ourselves left for China last month to begin an 80-day program. They plan to walk 2,500 kilometers from Beijing to Seoul to Tokyo.
“There are so many things to see when we walk rather than when we travel by car,’’ said the head of the club, Park Yong-won, 57. “I hope the marathon will be a good, both for our physical and mental health.’’
Some “walking maniacs,’’ even like to walk barefoot. A barefoot club with some 80 members enjoys shoeless walking once a week along the trails of Mount. Gyejok in Daejeon. One of its members, Sin Sang-rae, 42, says walking barefoot on moist sand gives a pleasant stimulus throughout his body.
“Some members told me they are now free from the insomnia they lived with for many years,’’ Sin said.
“Ultra Walking,’’ a marathon-like walking event appeals to walkers with competitive spirits. Each participant in the event has to walk 50 kilometers in 12 hours or 100 kilometers in 24 hours.
“It’s not something that everyone can do,’’ Kim Jae-kyu, 48, head of the Walking Along the Road of Life club said about ultra walking. “You get a great sense of achievement when you finish the race.’’ 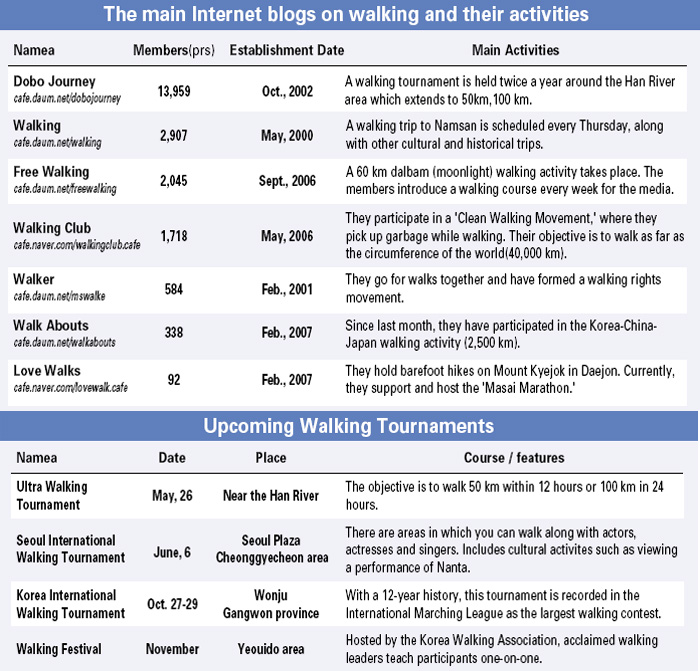