Actress without ambition gets it all

Actress without ambition gets it all 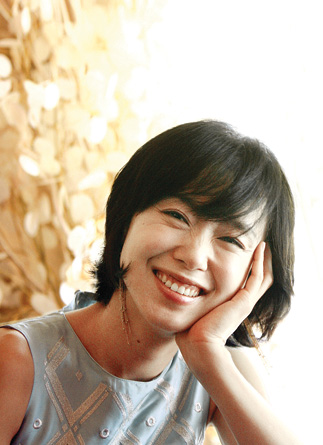 A scene from “Secret Sunshine,”starring Jeon Do-youn.Provided by the company

Jeon Do-youn is one of the most versatile actors in Korea. From a hillbilly teenager with rustic clothing in “The Harmonium in My Memory” to a housewife who lost her mind as the result of an extramarital affair in “Happy End,” Jeon has moved from one role to another and has become a jewel in the Korean movie scene.
Today, Jeon will be on the red carpet at the Cannes International Film Festival in France, promoting her role in “Secret Sunshine.”
In an interview before she left for the French resort city to attend one of the world’s most important film festivals, Jeon said she was not that confident about her role in “Secret Sunshine,” in which she plays Sin-ae, a woman who loses her husband in a traffic accident and her son to a kidnapper.
Her character lives in a country town with a name whose Chinese characters mean “Secret Sunshine,” Sin-ae almost finds relief by devoting herself to religion. Yet she loses her faith in God when she confronts the kidnapper of her son, who tells her that he has already been saved by God.
“After reading the script, I felt I could not do it,” Jeon said. “And the director said he appreciated my honesty.” But Jeon eventually decided to accept the role, thinking, “Why don’t I test myself and go beyond my limits?”
It was not easy. The hardest part was the scene where Sin-ae gets a call from the kidnapper. “For the first time in my acting career, I told the director that I couldn’t do it,” Jeon said. The director understood, waited for her to find her pace and got the scene on film.
Jeon doesn’t scream or act crazy. Instead, she swallows her grief. In a scene where Sin-ae leaves the prison after confronting the kidnapper, she simply collapses on the ground. This is director Lee Chang-dong’s way of conveying realism without sympathy. He draws the cruelty of life as it is. “I had this feeling that all the energy went out of me. I was physically awake yet mentally in a coma,” Jeon said, referring to her emotions after shooting the scene.
“Lee doesn’t give much direction, and I was sometimes angry and defiant,” Jeon continued. “Yet I now understand that the director wanted the actors to find answers for themselves.” She said the director’s style helped her stay away from the tried-and-trusted methods she had used in the past.
Film critics hailed Jeon’s performance. The film is scheduled to open next week, but critics are already giving her rave reviews. One said, “We thought Jeon Do-youn had nothing left to offer. We were wrong.”
Lee is sharing in the success, fuelling his comeback to the movie scene after years of serving as the culture minister. 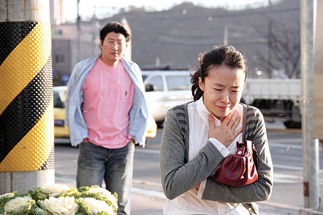 Song Gang-ho, who plays a supporting role in “Secret Sunshine,” said, “This film is the best production ever from the director, and it is all about Jeon.”
The filming went on for five months and Jeon found it physically and emotionally exhausting.
She coped, in part, because, she met and married her husband. “It was during the final stages of filming that I met my husband and I guess I needed some consoling from the stress of my role in the film,” Jeon said. “I usually go out with a person for at least four seasons to get to know him. But this time, everything went so fast, and I surprised myself.”
Jeon describes herself as an “actress without ambitions.” “I didn’t know I would be successful, because I thought I didn’t have what it takes to be an actress,” Jeon said. Her dream was to be a “good wife,” so now she says she has everything ― a great career and a happy married life.
What brought her this far?
“I have a strong will and I never want to lose,” she said. “Once I decide to do something, I clench my teeth and fight until I win.”
In a recent survey by the film magazine Cine 21, Jeon was placed third on a list of best actors. Among actresses, she was number one.