[Talk of the town]Rain flies

[Talk of the town]Rain flies 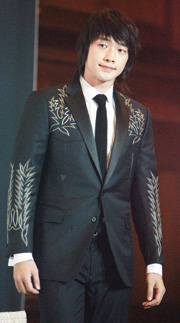 Rain, also known as Bi and Jeong Ji-hun, has decided against renewing his contract with JYP Entertainment, the company that made his name. Rain was the biggest star at the talent agency, founded by Park Jin-young, the singer-turned-manager. The agency discovered him and trained him for four years before he made his debut five years ago.
“It feels like watching my own son leave home,” said Jeong Wook, an executive of JYP Entertainment. The agency stressed that it’s not an ugly break-up, saying that Rain consulted with Park, who wishes him the best. Local media are now desperate to know which talent agency Rain will choose, and speculation is rampant that he may join the company where his father works as an executive officer. Rain himself is a stockholder in the company, whose Korean name translates as “White World.”
JYP Entertainment, meanwhile, said that Rain now has a strong chance to make his debut in Hollywood. The Wachowski brothers, who directed the “Matrix” series, are eyeing him as a character for their next film, “Speed Racer.” If the deal is made, Rain would co-star with Susan Sarandon.