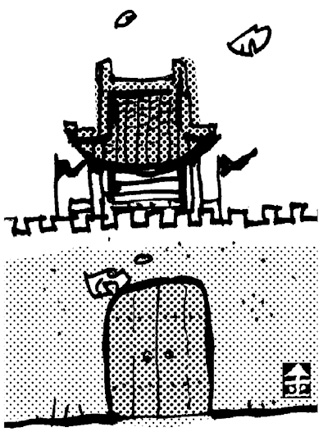 Knowledge and wisdom are different, for the latter is knowledge coupled with good judgment. Although knowledge and wisdom should go hand in hand, wisdom often trumps knowledge.
But there are times wisdom wavers and fades away.
Fooled by immediate interests in front of him, a person can misjudge the truth of a situation and ruin his entire life. That happened to a king of the Cho Dynasty during the Warring States Period.
The Han Dynasty, expecting a quick attack from Qin, called for assistance from the king of Cho. It suggested handing 17 castles of its province over to Cho rather than losing them to Qin, on the condition that Cho help Han. The king of Cho was extremely excited by the idea he would reap 17 castles like being handed a slice of cake.
On that day, however, the king dreamt that he rose to the heavens on a dragon, wearing a cloth tied to one shoulder that suddenly fell down to Earth. Dream analysts were summoned to analyze his wild dream. Many told him a great fortune would come to him soon, but it would be followed by misery as great as the fortune. Yet nothing could divert the king from the conclusion that he would gain 17 castles. The king of Cho finally accepted Han’s proposal, and received the 17 castles in the region by dispatching his troops. But that just stirred up the furor of Qin, a strong power of the Warring States Period. Qin crushed Cho in the following battle, in which 400,000 of Cho’s soldiers were massacred. The cheap expectation of a free handout sank his kingdom.
Sima Qian, a cold recorder of history, did not miss the chance for a quip: “His interests blinded wisdom.” Others can replace the term “interests” in the sentence. When fortune blinds one’s judgment, then it can be said that fortune blinded wisdom. Sex can also blind wisdom, destroying one’s life due to sexual desire.
Infighting in the Grand National Party is getting severe because power seems so near. After having struggled over the rules for the primary, they had seemed to have reached a compromise. But soon they started fighting about verifying the qualifications of the candidates. Loud vilifications by one candidate are soon followed by venomous retorts by the other.
The infighting has passed the point where it can be called a customary political contention. Because the resolution to annihilate one’s adversary is so obvious, people’s hopes for both candidates fade away. Sima Qian would have recorded them as politicians whose wisdom was blinded by the lust for power.