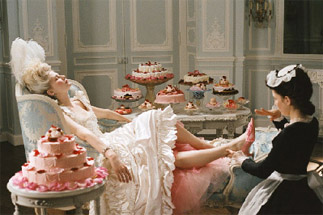 The famed wife and queen of Louis XVI is a modern party girl of leisure in Sofia Coppola’s “Marie Antoinette.”

“Lost in Translation” was one of the most poignant and shockingly funny films of 2003, a tale of alienation in a foreign land, sardonically yet touchingly anchored by Bill Murray, that made a fantastic debut for Sofia Coppola.
Coppola again writes, directs and produces “Marie Antoinette,” a film with many similarities to her first work ― Marie is a woman thrust out of her homeland of Austria into the French court, and then onto the throne, and never quite gets used to power ― though she certainly gets used to privilege.
“Marie” does meander much more than “Translation.” This is less a sharp tale of court politics and more a personal profile of a woman who lived a satiated but ultimately unhappy life.
“Marie Antoinette” has much of the lovely, colorful photography of court excesses of “The Last Emperor,” but unlike the Forbidden City of that epic, where the waves of revolution crash right up against, and eventually over, the palace walls, Versailles is an isolated island, a bubble of illusions where Marie and her pals indulge their desires for wine, food and companionship with literally no awareness, not to mention regard, for the cost.
The camera rarely leaves Marie’s side, making this a story of a woman’s journey through her life, not, as other films in the genre turn out to be, a story of what other people do to her. The film opens with Marie (Kirsten Dunst) leaving her home in Austria and being “handed over” to the French ― when she is required literally to strip off everything of her former life.
Dunst is perfect for the title part, allowing herself to be shepherded along by the court protocol police and luxuriating in her pleasures like a child in the aging body of an adult.
Her fiance, the future Louis XVI (Jason Schwartzman) is as childish as she is, declining to help her produce an heir despite the importance of the task (and the undeniably creepy machinations of everyone at court to make it happen).
Stylistically, the film is another half-modernized costume piece in the vein of “Shakespeare in Love” or “A Knight’s Tale.” The music of Aphex Twin introduces us to the stately halls of the royal palace, and trays and trays of colorful desserts fly past to “I Want Candy.” The queen and her girlfriends obsess over shoes, clothes, gossip and men in the same way ― and using the same vocabulary as ― any modern women.
Coppola takes another interesting linguistic turn with accents ― which are, in this genre, almost universally English even if there’s no reason for them to be.
The film is, after all, set in France, and though a few characters speak actual French Antoinette herself speaks in an American accent as do a smattering of her friends. These and other anachronisms do give the film a comfortable and immediate flavor, but they’re also unsettling, making the story seem a little trivial ― like a party-girl movie with frilly dresses.
Coppola puts special focus on the decadent, contented moments of Marie’s early life, indicating the death of one of her children only in a shot of two workers hanging a painting with the baby brushed out, and ending the film long before the full fury of the French Revolution had come to bear on her delicate shoulders.
As a result, it is somewhat difficult to discern a message ― is the instruction to remember to grow up and take charge of one’s own life? To pay mind to the damage our luxurious lifestyles cause even when it’s so easy to ignore them? After all, today’s Bastille mob is far away, rioting in the Middle East, unable to march to the doorsteps of America’s middle-class suburban Versailles. Of course it’s unlikely Coppola had such a political aim in mind.
More probably, this is simply a portrait of a woman who was manhandled in the last gasps of the royal patriarchy into a role she never cared to play, and then was slandered by history, from a sympathetic perspective.
The carefree bliss of a young, unambitious woman who despite her public position chose instead to smoke, eat and play in fields of grass with her children and animals ― “Marie Antoinette” pinpoints the sort of pleasant enough but faintly disturbing feelings inherent to European royalty.