An emerald isle with traditions and fine seafood

An emerald isle with traditions and fine seafood 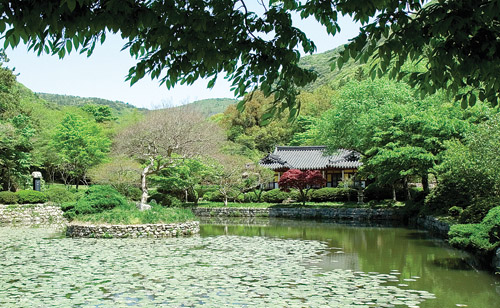 Jindo, South Jeolla is Korea’s third-biggest island after Jeju and Geoje and its sea partings draw thousands of tourists from across the country, but the town is better known for farming than fishery. However, there’s more to Jindo than food. The main town on the island is saturated with tradition and the arts flourish, especially music and calligraphy. It takes some time to get to Jindo but once people arrive many have a precious experience that they remember for a long time. It offers gorgeous landscapes and historical relics, not to mention the lush array of local delicacies that are too numerous to sample within a few days. 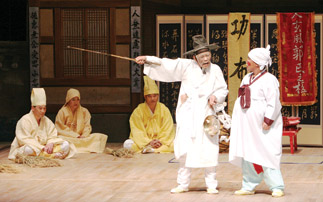 Tradition
,If this is your first visit to the island, keep driving past the Jindo Bridge in Haenam County. About half-an-hour later you will see the National Center for Korean Namdo Performing Arts (061-540-4042).
The center has an amazing view of the southern sea and it’s lovely to enjoy the breeze from the water while sitting on a bench with some tea. The sunsets from this position are truly memorable
The center is home to the Jinakdang theater which has 600 seats. It’s the venue for traditional music and dance performances every Friday, at 7 p.m. A variety of traditional music troupes also perform on the first and third Monday of the month. During the second and fourth weeks of the month there are pansori performances.
The pansori performance is worth seeing. The set and costumes present a rare glimpse into the rich heritage of this region, which has been passed down through many generations.
“It’s a rare show of traditional music, dance and song that’s offered for free,” says Park Yeong-do, the center’s director.
Separately from the shows, the center also runs two-day tours that begin on every second and fourth Friday of the month.
The program takes visitors around historic sites on the island and includes a hands-on lesson in traditional percussion, a visit to an art auction and a night spent at the center’s guesthouse, which has a view of the sea. Room rates range from 57,000 won for two to 104,000 won for four and include three meals and the lesson.
When you visit Jindo, there is another attraction that many travelers overlook. It’s Unlim Sanbang, the private residence of Nam Jong-hwa, an artist whose family’s artistic heritage stretches back four generations.
The house, though, is a work of art in itself and there are lovely details like the crystalline ponds that can be seen from the main terrace and the mountains that sprout from behind the house.
Every Saturday at 11 a.m., the owner holds an art auction, selling traditional Korean paintings and calligraphy produced by local artists who are funded by the regional government.
“It’s a chance to purchase artworks 30 to 50 percent more cheaply than at local galleries,” says Seo Seon-suk, an official in the culture and arts department of South Jeolla’s provincial government.
Small-to-medium size paintings are priced from 200,000 to 600,000 won. Call (061) 286-5426 for more information.
After lunch we went to Jindo’s Ethnic Culture Center (061) 540-3541, where, every Saturday, they host “an ethnic tour,” and a performance by a band of musicians that consists of farmers, housewives and merchants who live on the island. It’s a unique show that doesn’t ask for meticulous etiquette from the audience during the performance. Even drunk people are encouraged to come and see the performance.
The show is a big party with the audience humming and dancing. Then, at the end of the evening, organizers have a lucky draw and award free gifts of black rice and dried seaweed. 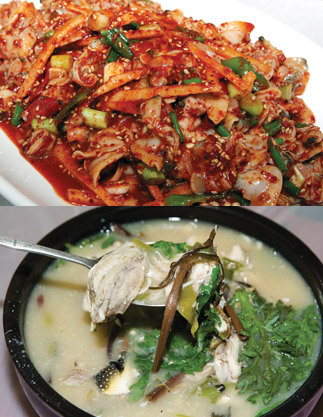 
Dining out
1. Sarangbang restaurant
Located behind the Taepyeong Motel this is one of the best seafood restaurants in South Jeolla. One bite of their steamed cuttlefish brings out the freshness of Jindo. Kim Ok-ran, the owner, says, “Every ingredient is freshly caught.”
They also have delicious side dishes including salted oysters and pickled crabs. A reservation is essential on weekends and holidays. Menus range from 25,000 won for four people. For information, call (061) 544-4117.
2. Gulpo restaurant
This restaurant is located near the Bae Jung-sohn shrine. They serve Jolbok (panther puffer) boiled with doenjang (soybean paste) and gosari (a type of vegetable). 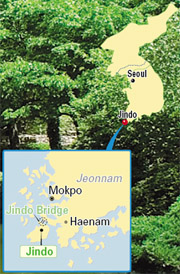 The softness of the fish goes well with the delicious side dishes. Owner Kim Ok-jin says, “There are times when the tide is rough and fish are rare, so call before you come.” Jolboktang costs 10,000 won per person. For information, call (061) 543-3380.