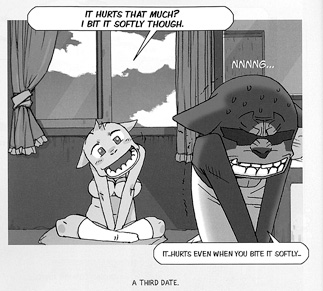 Catsby shares an important fact about males with Sun in “The Great Catsby.”

By now, most readers and every savvy bookstore owner in the United States has heard of manga, Japanese comic books. They accomplished what American comics never could ― enticing a large female readership ― and kept going, so that today it’s not unusual to find manga series like “Naruto” or “Fruits Basket” in the top 50 on the Booklist sales charts.
Korean comics were long ignored in the U.S. But in recent years, manga publishers hungry for material have snapped up local comics, some hoping to make another popular neologism out of the Korean term: manhwa.
One of the first titles out in English was “Priest” by Hyung Min-woo, now on its 16th and penultimate volume in the U.S. This comic has brutal violence, stark and impactful drawings ― and nothing at all to mark it as Korean.
Its title character is Ivan Isaacs, a priest in a nightmarish reimagining of America’s Western frontier who has sold half of his soul to a devil called Belial.
The story follows the attempts of a circle of Satanist clergy to resurrect a demon called Temozarela, and Belial and Ivan’s attempts to stop them, interspersed with scenes from the present day, of an educated priest struggling to understand the events of “300 years” in the past (Hyung’s American history is a bit shaky). 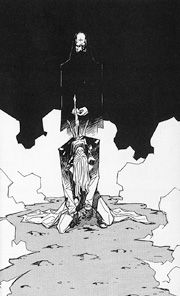 The shadow of a dark master hangs over Ivan Isaacs, wounded in a battle with a zombie-summoning clergyman in “Priest.”

The artist claims to be a great fan of American comics such as “Hellboy,” an influence that’s readily apparent. Though the page layouts and the sketchy quality of the drawings conforms to typical action manhwa/manga conventions, the characters themselves are very American.
Hyung’s thickly layered lines and liberal use of black on a black background (every page is doused in ink) are perfect media for his epic, undeniably cool battles, which pit legions of zombies and demons against one another, and for his character’s crippling psychological conflicts. Just don’t expect anything original or profound from the story.
On the completely opposite side of the spectrum is “DVD” by the manhwa star Kye Young Chon, a romance comic about a girl named Ddam Shim who after failing her college exam discovers her relationship of three years has all been a lie, and, in trying to kill herself, ends up living with a pair of male oddballs called DJ DD, a heavily pierced goth with a fake eyebrow fixation, and Venu Gwak, a pretty boy with nothing but contempt for womankind (unless large breasts are involved).
The dialogue of these two shallow and oblivious but gentle outsiders, who don’t even realize they’re saving Ddam Shim’s life, exhibits Chon’s great talent for comedic patter and timing, while Ddam Shim’s occasional, unexplainable hallucinations add to the book’s charm. The art itself is familiar for the genre, but at the same time distinctive and pleasing. The translation is impeccable, flowing perfectly from one frame to the next.
The publisher of “DVD,” DramaQueen, is also bringing Chon’s Korean hit “Audition” to the States. 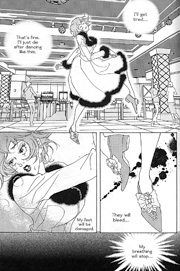 Ddam Shim’s illusory pink shoes force her into a dance that she hopes will exhaust her to death in “DVD.”

But of course a cultural product like manhwa hasn’t truly “arrived” in a foreign market until the industry at home begins to take notice. That happened last year, when manhwa giant Ecomix opened an American subsidiary called Net Comics. One of their early titles is “The Great Catsby,” an exquisite story of an unemployed college graduate’s search for love and the purposeful life in a run-down section of Seoul. Most of the characters are cats, with delightfully expressive, touching, often hilarious faces. Extraordinarily Korean in culture, “Catsby” is also unfortunately still quite Korean in its English, and early in the first volume a poorly translated phrase often blocks the flow of the beautiful, full-color pages.
Oddly, as far as this reviewer is aware, no English-language booksellers in Korea consistently stock English-language manhwa, but they are available by special order from online venues such as Amazon.com and the cheaper, locally-run and recommended WhattheBook.com.