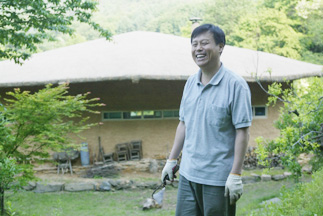 The poet Do Jong-hwan relaxing in his back yard. [JoongAng Ilbo]

Do Jong-hwan is not afraid to take risks. He was a high school teacher and an activist before he became a poet. Today he is an icon for those who like romantic prose. He became a celebrity poet after he published “My Rose Mallow,” a famous poem about his wife’s fight against cancer. It was made into a film that became a box-office hit.
However, last year he took on the mantle of “literary delivery man” with a local arts council. Every Monday morning his role was to send poems by different authors to subscribers of the council’s Web site.
In a country with one of the highest levels of Internet use and some strict controls of Web content, he’s lucky his e-mails weren’t deleted as spam. The poems he selected have now been put together as a book, testimony to the strong reception for the works in cyberspace.
“I felt like I was working in a vacuum at first,” he says. “But I was amazed by the readers’ response. I realized that literary activity in cyber space has become very energetic.”
Do, 53, can back up his claim with facts. The staff at the Literary Plaza (www.munjang.or.kr), the Web site for the local literary council, saw that the number of visitors to the site rose dramatically every Monday, up to 20 thousand.
His job was part of a “literary sharing project,” designed to increase the number of people who read poetry, which some say is a dying art form. When the service began last year there were only 2000 subscribers. But the strength of the community increased quickly. By last month, the site had 220,000 subscribers.
“It was a mistake to think that the demand for poems has been downgraded because the sales of poetry books in bookstores have gone down,” he says. “The public’s interest in poetry is the same. There are countless people who post poems on their blogs.”
The success of the poem delivery service owes a lot to Do. Every week he selects poems by various authors and sends them to subscribers, along with a brief essay about their work.
“We only sent one e-mail to a subscriber in Daegu Metropolitan Office of Education, which was then sent to 20,000 teachers in the city through a company e-mail,” he says. “Then the teachers sent them to the students. The students wrote postscripts on the bulletin board of the Literary Plaza. I realized this was the strength of literature and the Internet.”
The book “Writing a Letter with a Petal” (Changbi Publishing) comes with a CD which has readings by popular poets. Through June 10th Do is hosting an Internet poetry reading event called the “UCC Poetry Reading Festival,” (cafe.daum.net/sibaedal).
“I want to push people to read a poem every week,” he says cheerfully. “After some time there will certainly be a difference between people who do and those who do not. After all, the quality of culture comes down to the quality of life.”