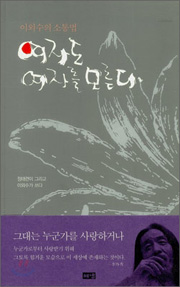 Lee Oe-soo is so eccentric that his fans wouldn’t be surprised if he wrote a new novel about a flatulent rabbit.
He’s written books about the sacred value of literature, mountains and water, a martial arts master and the lives of writers and artists with special reference to the disconnect between fantasy and reality. His works are popular, but they are not treated very seriously among the literary fraternity. Perhaps that’s because of his multi-talented personality, which has led him to make cameo appearances in movies, have art exhibitions and write sensational poems in between producing his novels. In his latest book “A Woman doesn’t Know Another Woman” (Haenaem Publishing) he delves into one of the most perplexing topics for any novelist ― women, whom he describes as “the most curious life form in the entire universe.”
The book is a witty collection of essays about and for women, and ideas that are often associated with women, like vanity and love.
The book was originally written to “console” the souls of women who, he fears, live in constant anxiety because they fear they will not be loved or seen as beautiful. He criticizes the biases of our educational and religious systems that denigrate women’s behavior without trying to understand their desires. Then he gives a final piece of advice to women ―“Fall in love, whatever it takes.” By Park Soo-mee