More people are choosing to walk as their first step in pursuing a slow life. [JoongAng Ilbo]

Kim Byeong-seon, the chairman of the Usan Slow World Committee in Jangheung, South Jeolla, has recently renovated his hanok, a traditional Korean house with hwangto, or yellow earthen soil. Kim’s newly-designed house has become a tourist attraction for many residents in Usan Township, where he was the first to lead the slower lifestyle increasingly popular among Korean urbanites.
“More families are planning to remodel their houses with yellow soil,” says Kim. “In fact, my 83-year-old mother is used to fighting minor illnesses due to age. Surprisingly, soon after we moved into the remodeled house, her health gradually recovered, thanks to the earthen clay walls.”
Kim’s old house was reconstructed over 10 months. More than 60 centimeters of the walls were covered with yellow soil, a material known to affect humidity and temperature.
With Kim as the pioneer, the city government of Jangheung launched the “Usan Slow World” project in 2006, countering the rapid changes in today’s rushed, competitive society. The project is sponsored by the government through 2009. The goal is to bring the county in harmony with nature, leading to an eco-friendly environment, and promoting the local economy.
“Slow life,” a broken English term introduced by Lee Gyu (the Korean-Japanese author of “Slow Life”), dates to the “slow movement” of 1980 when McDonald’s planned to open its branch in Piazza di Spagna, Rome. Carlo Petrini and others protested with bowls of penne as their weapons. Their success led to the creation of the Slow Food organization, which hopes to foster a culture where people value nature, balance and the wise use of time.
Amid a rapid society where competition is a must to survive, some people choose to live at the speed of a snail. Forty cities around the world have proclaimed themselves as slow cities.
In Korea, the slow life movement is being promoted in several cities, including Jangheung, Pohang, Sinan and Damyang. These cities are in the process of being listed in the Slow Cities Movement, whose headquarters is in Italy. No Korean cities are officially part of the worldwide movement yet. 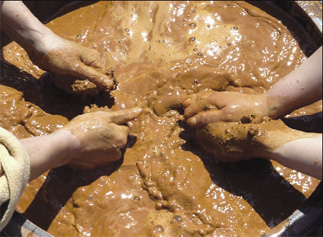 Clothing dyed in hwangto, or yellow soil, is thought to improve health.

“It is difficult to become a member of the Slow Cities Movement,” says Gwak Gwang-ho from the Culture and Tourism Institute in Jangheung. “The town must have countryside scenery, abundant traditional culture, several craftsmen, bicycle paths, public squares, parks, decent restaurants with traditional food, approval from the mayor and more.”
What a city must not have are loud noises, flashy neon ads and traffic jams.
The idea of slowing down the pace of life across the nation can be seen in urban areas as well.
The Korean Statistical Information System gathered surveys from 2000-2004 on how people spend leisure time.
A survey from 2000 showed that 62.7 percent watch TV at home. In 2004 the number dropped to 56.7 percent. This decrease is significant. In 2004, people found more diversified ways to spend leisure time, including self development, reading or visiting orphanages or nursing homes, the survey said.
Lee Hyun-woo, a senior at Ewha Womans University, is an example. Lee rides a bike from her home near Songpa Station to Jamsil Station each morning to reach school.
“During the morning, when a minute is worth as much as 20 minutes, I choose biking as a means of transportation because first, I want to avoid traffic reaching Jamsil, and second, instead of cars, buses or subways that are jammed with people, having my own ride gives me pleasure and a chance to look back on my life and enjoy the nature around me,” she said.
Kim Yoon-a, a graduate student in Seoul, takes from 3 hours to as long as two days to enjoy fresh baked cookies and soft sponge cake. While it takes only15 minutes to buy cookies at a supermarket, Kim prefers to bake them with her own hands.
“The experience gives me the pleasure of living a slow life,” she said. “I enjoy giving out presents - presents that are unique and can’t be bought. I believe this fosters slow life because when I bake cookies or cakes at home, it benefits people’s health [she uses organic ingredients] and also brings a smile to their face and definitely to mine.”
Despite the time-consuming and complex procedure in obtaining ingredients, fermenting, baking, and washing the dishes, for Kim, “time is of less importance compared to value.”
Slow life does not follow mass culture and instead pursues free will and the biorhythms of nature.
Kim Tae-hee, employed by a textbook company, shares her new habit.
“On Saturday nights, I turn off all my alarms and my cell phone,” she said. “The next day, I wake up according to my biorhythm, and that’s when I start enjoying my time alone. With a book in my hand, I take a slow walk towards Dosan Park, along Garosu street, making eye contact with people. Grabbing a sandwich for brunch, I listen to music and the sounds of nature, and feel the breeze that strengthens my soul and body for the upcoming week, which I know will be another tough one,” says Kim.
Slow is working for her. 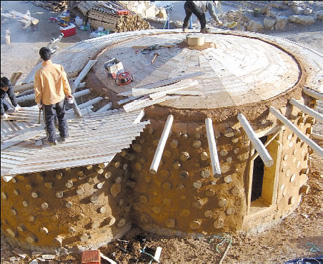 Houses built with hwangto are said to be a natural remedy for disease. [JoongAng Ilbo]

“The surprising thing is that this habit of taking away a huge chunk of precious time on a Sunday morning has in fact freshened up my dreadful Monday mornings,” she said.
Residents in Jangheung, following Kim, the chairman, have also contributed to make their county more environmentally friendly.
“Last Arbor Day, we ran a campaign to plant trees and tend the flowers,” said Kim.
In Jangheung, flowers, trees and plants adorn the 18-kilometer road. Residents do the work ― the council does not hire anyone. They work together to make Jangheung closer to nature.