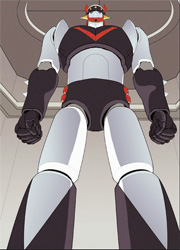 Robot Taekwon V, a cartoon character from the 1970s, is revived in the Web cartoon “V” by cartoonist Kim Tae-gun, right. By Choi Seung-shik

Robot Taekwon V was the cartoon hero of the decade in the 1970s.
All of Korea fell in love with the hero who saved the world from the evil General Malcolm. It was a time of political instability, with anti-dictatorship demonstrations breaking out everywhere.
Imagine that the political sector decided to use Taekwon to break up the demonstrations. However, Taekwon V refuses to cooperate with the military regime, and the government orders Taekwon V’s disposal. Three decades later, Taekwon V’s pilot and friend Hoon runs into his old friend Chul, a tin robot. Chul brings Hoon to an object, which is none other than Taekwon V, whom Hoon buried 30 years ago.
This is the storyline of “V,” the Web cartoon series at Media Daum. The cartoon has brought the old forgotten cartoon hero back to life, with a touch of the 21st-century. With an average of a million hits per day, the cartoon has been wildly popular online.
The cartoonist “Jeppy” and his creativity have attracted online fans.
Jeppy initially revealed only his pen name and this aroused curiosity from his fans. Last month, the JoongAng Ilbo sat down with Jeppy, or Kim Tae-gun, 32, at the office of Munhak Segyesa. The publishing company is scheduled to publish an independent volume of “V” later this year. Kim, who lives in Busan, had just arrived in Seoul for some sketches for his upcoming volume. 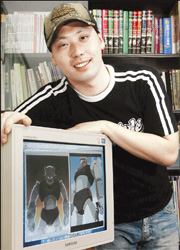 “It is an honor that Taekwon made me famous,” Kim says. He has been drawing cartoons since elementary school, and his characters have always been robots. His favorite comic books as a schoolboy and the educational comic books he drew in college were also about robots. He said it was almost fate that the Taekwon character appeared in his first Web cartoon series. He intends to concentrate on robot-related comics.
Currently, he is collaborating with Yang Woo-seok, the director at Robot Taekwon V Corporation, on a film based on his Web cartoon. The corporation proposed the project after reviewing Kim’s work. The film will be ready by 2009, and the end product will stay loyal to Kim’s work.
Episode 52 was scheduled to be the final episode of “V,” but due to its popularity the series will be extended.
“I am glad to work on more episodes, there is still so much more I would like to tell,” says Kim.
During his trip to Seoul, he made sketches of Namdaemun and the Han River area. These will be the battlefields between Taekwon V and the evil robot. Kim advises fans to pay extra attention to the battles on Wonhyo and Mapo Bridges. He also hinted that the famous giant monster from last year’s film “The Host” might make a cameo appearance in the movie.