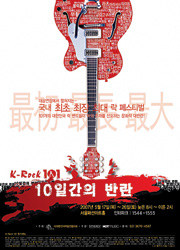 In the heart of Seoul, a large-scale rock festival is taking place. Together with Seoul Fashion & Art Hall, Korean Rock Development Council is hosting “K-Rock 101: 10 Nights of Rebellion.” Over the ten-nights of the festival, 101 Korean rock bands are scheduled to perform.
Last Thursday, Tommy 6 took the stage to open the event and delivered a punk rock set that had everybody dancing.
The band debuted back in 2005 with “Worst of My Life,” and has been performing on the club scene ever since.
Big names like Buhwal, Crying Nut and Peter Pan Complex are also taking part in the festival. Buhwal also performed on the first night of the festival. Over the last two decades, the band has been recognized as a legend of Korean rock music, with a string of hits. Festival managers said that K-Rock 101 is intended to promote live music.
The festival aims to introduce young rock bands to the public, and provide an opportunity for Korean rock music to grow. All 101 bands were carefully selected to bring a diverse sound and vibe to the festival.
“The audience will appreciate the creative, free music the festival offers. It will be a good break from the stereotyped music they see on television,” said Lee Young-bok, the president of the Korean Rock Development Council. He also added, “You do not have to be a rock fan to enjoy the concerts. We have prepared an event that everyone can appreciate.” estyle@joongang.co.kr