A traditionalist defends a fragile culture

A traditionalist defends a fragile culture 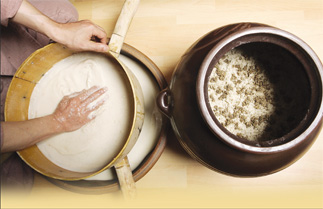 Rice mixed with malt is fermented for several days, sometimes months, to become a genuine traditional wine of Korea. By Kang Uk-hyun

Park Rock-dam has a lot to complain about when it comes to the drinking culture of Korea, and he has good reasons. Years spent in the study of traditional wine has taught him that the “bombs,” or boilermakers, that define the current drinking culture are an undesirable innovation and do not represent the traditions of the past.
“Traditional wine culture is about taking time and patience to relish the taste and fragrance, not gulping down a mix of cheap soju,” Park said last week in his office at the Traditional Korean Wine Institute. “Koreans in the past used to drink a small amount of wine and took time to relish the flavor.”
Denouncing today’s drinking culture as “vulgar,” Park continued, “Many Koreans drink cheap boilermakers for the sake of getting drunk.” Park said this is a custom from the poor old days when Koreans had little money but lots of stress from excessive economic growth. 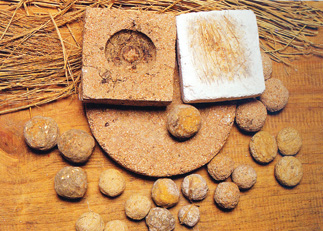 Korean malt, called nuruk, is made of ground wholewheat and water.

“Now is the time to rediscover the lost culture of traditional winemaking and the traditional ways of appreciating it,” he added.
Park himself is not much of a drinker, but he came to develop an interest due to his father, whose biggest joy in life was drinking whiskey, which, as a young man, he could not afford, so he decided to look for varieties of traditional wine. That pursuit led him to quit his job as a magazine reporter and for 13 years he crisscrossed the country doing research. Now he has recipes for over 420 home-brewed liquors, and an office filled with pungent smells from jars of old wine.
Rice, water and malt are the three key ingredients required to brew traditional wine. On top of these basic ingredients, Koreans added flavors using specialties from their regions, such as lotus leaves, and seasonal products such as azaleas in spring and chrysanthemums in autumn. Additional materials include medicinal ingredients, such as ginseng and other herbs used in Oriental medicine. Lotus leaf wine, a specialty in Asan, Chungcheong is believed to build up energy and improve blood circulation, Park said.
Another special wine from Cheongyang, South Chungcheong uses gugija, the fruit of the Chinese matrimonial vine, an important ingredient in Oriental medicine. It is known to lower cholesterol and to improve the function of the body’s organs. Ginseng is a specialty in Geumsan, South Chungcheong and, naturally, that region has a good reputation for its ginseng wine.
“There is a reason why many Koreans say ‘yakju’ which means medicinal wine,” Park said.
Stressing his belief that brewing and drinking traditional wine is an artform, he noted that Koreans use the word “bitda” for brewing wine, which is a word that is also used in connection with making porcelain.
Korea’s rice wine is divided into three categories ― takju, unrefined and thick wine, cheongju, a refined, clear wine and jeungryuju, a refined, distilled liquor. Takju is made by squeezing the liquid from a fermented mixture of rice, malt and water, without further refinement. It has a yellowish color, a thick texture and a pungent, acid flavor. 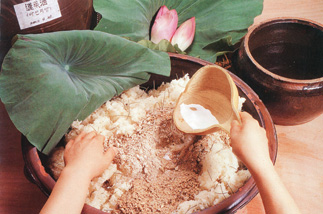 Fermented nuruk is smashed into powder and mixed with rice and other grains to brew various types of wine. Provided by Park Rock-dam

Cheongju involves an additional process, whereby a basket made from woven bamboo is placed into the jar of fermented rice and malt. After a period of time, which depends on the different kinds of ingredients, a clear, refined liquor gathers inside the bamboo basket.
When this refined liquor is sent through the distiller one more time it becomes the hard liquor known as soju. Park stresses that this traditional soju is different from the currently popular and cheap forms of soju which he says are made with raw spirit derived from sweet potato that is then diluted with water and mixed with sugar.
“It is lamentable that these kinds of soju products dominate drinking culture,” Park said, “The distillers should stay away from such a cheap way of brewing, if they have any conscience.” He has similar complaints about bottles of makgeolli, a type of takju, the unrefined, thick rice wine, that is usually sold at affordable prices. Instead of the orthodox way of fermenting the rice, makgeolli is made from low-priced wheatflour, Park said.
There are different ways of preparing rice in order to brew wine. One common way is to steam it to make bap, the cooked rice seen on every Korean table, or porridge. Others use tteok or rice cakes in various shapes, such as a doughnut-shaped rice cake, mashed sticky rice or small, round rice cakes. The rice cakes also differ in type according to whether they use sticky rice or non-glutinous rice. Different shapes and ingredients lead to different flavors and fragrances. For example, a wine made using doughnut-shaped rice cakes requires a more complicated procedure and produces a smaller amount of liquor, yet the hard work pays off in the end in terms of fragrance and a sweetness.
Korean malt, or nuruk, is made from fermented ground whole wheat and water. The longer it is fermented, the better the quality. Lumps of ground wheat and water are formed into either round or square shapes for fermentation. After the fermentation process, the lumps are smashed into powder and dried, in order to remove the fetid smell. Then, the malt is mixed with different kinds of raw spirits made of rice and then go through another fermentation process. The number of fermentations differ according to the type and quality of the wine. “Traditional wine is about having patience and keeping principles,” Park explained. “That’s why it is costly to brew the wine according to traditional recipes. Today’s businessmen pursue economic efficiency and convenience by using the dilution method.”
Park said that another beauty of traditional Korean wine, on top of its subtle fragrance and medicinal effect, lies in its “honesty.” “Wine does not lie. A sip can tell the state of mind and personal character of the brewer,” he said. 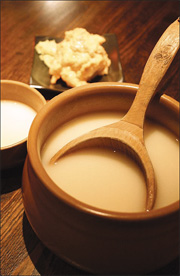 Park believes the taste of the wine brewed by his students helps him to read their minds. If they absentmindedly skip one single process it leads to a “vicious” taste. “When my student’s wine doesn’t taste right, I ask them if something is bothering them,” he said. “And I am always right. Traditional wine is like a treasure house full of hidden pleasures, and once the door to the treasure trove is open, it will add lots of flavor to the nation’s drinking culture. Koreans are known for their love of fermented foods like kimchi. No wonder they love traditional wine that’s made from fermented malt.”
Park welcomes the trend of recent years in which the alcoholic beverage industry has introduced more traditional wines, such as bokbunjaju, a wine made with a kind of Korean berry. Still, he thinks there is a long way to go before Koreans recover the forgotten history and culture of winemaking and drinking.
This is why he is all the more sad about the fad of drinking Western alcoholic beverages. “Koreans are eager to learn about Western wine and whiskey and many brag about their knowledge,” Park said. “But we are shunning our own wine. It would be shameful if traditional wine became a forgotten delicacy.” Park continued that Koreans despise their traditional wine because of their current obsession with drinking to get drunk.

Where to learn about traditional wine:

Museum of Traditional Wine in Jeonju city
Pungnam-dong, Jeonju City, North Jeolla
(063) 287-6305
www.urisul.net
Wine is brewed every first and third Saturday and the general public can participate.
Lectures are offered every spring and autumn.