Babies in a box

Babies in a box 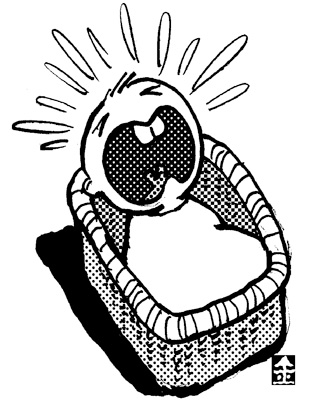 Korean TV dramas wouldn’t be the soap operas they are without the frequent difficulties the characters in the shows have with each other. Many of the dramas use the same plot, which goes like this: The main character learns about his or her adoption after becoming an adult, then has conflicting emotions after a chance meeting with the birth parents. Even though the situations are very common, the directors make it so that viewers can’t wait to see the next episode. Maybe the viewers see in the drama characters some of themselves, following their experience of living in a time following war, family separations and absolute poverty.
The origin of a prefix proves that traditional society here was very generous toward foster children, or eopdungyi in Korean. The prefix “eop” means “a ghost or an animal that protects or looks after one’s house.” A eop-gureongyi snake or a eop-dukkeobi toad are examples. Farmers used to think the animals would bring good luck to their houses, so instead of kicking them out, they welcomed them and also believed they received bad luck when the animals got hurt. Also, babies were usually put in front of childless homes, so they were also thought of as lucky and welcomed.
Western society had the same idea. There was a baby box to place unwanted newborns, called the “Baby Post,” until the 19th century in Europe. In 1709, a Hamburg, Germany orphanage had to put away its baby post after just five years because so many people used it that the orphanage couldn’t bear the expenses anymore. Jean Jacques Rousseau confessed in his posthumous work, “Les Confessions,” that he had thrown five children he had with his house maid, who later became his wife, in the church’s baby box.
A Catholic hospital in Kumamoto, Japan, recently set up a baby post and that has become an issue for debate. Supporters argue that “it is the last chance to save the child’s life” while people who oppose the idea say “it encourages people to throw their children away.” Unlike the hospital’s announcement that it would accept only babies under the age of 3 months, the first child accepted by the hospital was a 3-year-old child. The child revealed his name and said he thought it was a hide-and-seek game.
Baby posts almost disappeared in the 20th century, but were revived in the late 1990s in Europe.
There are more than 80 baby boxes in Germany and it has spread to Italy, Belgium, the Netherlands and Switzerland. The growth of this trend matches the global trend, in which the strongest survive in a field of infinite competition.