Jailed for selling the wrong books

Jailed for selling the wrong books 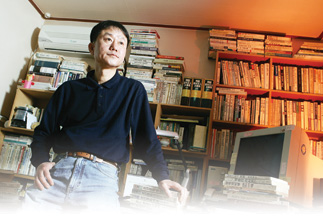 Kim Myung-soo in his office, from which he ran his Internet bookselling business. Police searched the office on May 1 and confiscated some books. By Jeong Chi-ho

Kim Myung-soo got out of jail recently after spending 15 days behind bars. His alleged crime? Running an online bookstore with books about communism, Russian history and North Korea.
The police say Kim broke the National Security Law and, by selling the books, has been “aiding the enemy,” referring to North Korea.
Last week, a court in Suwon refused to authorize Kim’s further detention. However, Kim’s lawyer told the JoongAng Daily he expects his client to be indicted for breaking Article 7 of the National Security Law. The case has intensified debate over a law that many liberals say is a Cold War anachronism, but which conservatives defend as a necessary bulwark against the communist forces to the north.
There are a handful of arrests under the National Security Law every year. In April, for example, Lee Si-woo, a photographer/peace activist, was detained under the law for taking pictures of a military facility and a restricted area near the demilitarized zone. He remains in jail.
Activists claim Kim’s case throws into question the extent to which Korea has matured as a democracy, permitting the freedom of speech and expression seen in other advanced countries.
After Kim’s arrest, police raided his house, where they confiscated about 300 books.
They included “The History of the Russian Revolution,” written by the Korean scholar Kim Hak-jun, which is widely available at bookstores including Kyobo.
Some online bookstores offer the book at a discount, describing it as a “classic of social science.” 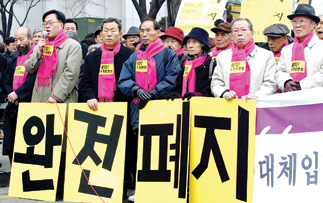 Liberal activists call for abolition of the National Security law while conservatives.

Kim said the books he offered for sale included one on the Russian revolution, by Leon Trotsky. It has the same title as Kim Hak-jun’s book and is also available at Kyobo.
“It’s a tragi-comedy,” Kim said, with a cynical tone of voice. “I just have to laugh about it.”
Kim sat back and ordered a bottle of soju and began smoking. It was 1 p.m last Thursday and a little early for a round of hard liquor, but he needed the bottle to help tell the story of his 15 days in jail.
Kim is not accused of leaking classified information. He began his online book store to make some money while he was pursuing a doctorate degree in Korean literature. The books that were confiscated by the officers who arrested him included communist classics such as “Capital” and “The Communist Manifesto” by Karl Marx.
Behind Kim’s back, a TV anchor with a shrill voice was reporting on a South Korean train crossing the Military Demarcation Line for the first time in half a century.
Kim downed a glass of hard liquor.
The 52-year-old Kim was arrested by the police on May 1 and was jailed until last Tuesday at the Suwon city detention house. He was kept behind bars and had to wear a prison uniform. Kim said that he felt the police were watching him after he saw a car that seemed to be tailing him in late April. After his release last Tuesday his lawyer, Kim Dong-hyun, said that Kim at the beginning of a long journey, since he believes the prosecutors will issue an indictment.
The police have tried to explain why they view Kim as a “dangerous” citizen, citing Article 7 of the National Security Law, which bans any actions that may “benefit the enemy,” meaning anti-state groups such as the North Korean regime. Kim’s list included books from North Korea dealing with their literature and the North’s version of the communist philosophy, known as juche. The latter made the police especially uncomfortable. 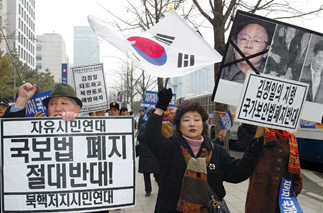 Demand it be kept in place.[JoongAng Ilbo]

Kim and his supporters say that the era when people shivered in the shadows thrown by the military regimes of the Cold War are long past, but the instrument that the police used to put Kim in jail was the old National Security Law, passed as the Cold War began. Enacted in 1948, the law bans activities that involve assistance to or contact with groups that oppose the South Korean state.
The law has been a source of controversy for generations. It was often used to suppress democracy activists during the military regimes of the 1970s. Leftists have often tried to get the law abolished, especially during the liberal-minded presidencies of Kim Dae-jung and Roh Moo-hyun, but their efforts have yet to bear fruit. Meanwhile, conservative groups have been vigorous in their defense of the law, arguing that the two Koreas are still, technically, at war.
Article 7 of the National Security Law is the basis of Kim’s detention. It prescribes punishment for producing, importing, possessing, distributing and selling publications for the benefit of North Korea. Kim claims he had the books in his possession for academic reasons.
“Those books are widely available in South Korea for those who study social science and literature,” he said. “In order to study the North Korean literature, it’s essential to understand their politics and philosophy. It does not mean that I agree with what they are saying, just because I read them.”
He added that he did not secretly smuggle the books from Pyongyang, but traveled around South Korean secondhand bookstores.
The police apparently took issue with the fact that he opened the bookstore on the Internet and made the books available to “many and unspecified persons.” Still, Kim claimed that his bookstore was only a small-scale business and his customers were all students, scholars or university professors.
“The police made me feel that the ‘red complex’ is alive and well, regardless of the fact that we now have an inter-Korean industrial complex,” Kim said, with a raised voice. “I learned that we have a long way to go before we have a free market in ideas. Surely our society has matured enough to be able to enjoy a free market of ideas.” 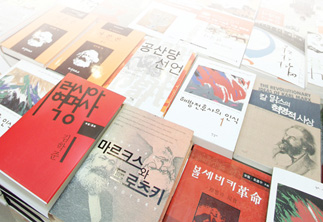 Books on sale at the Kyobo Bookstore include works by Karl Marx, such as “The Communist Manifesto.”

Some of Kim’s bookshelves are now empty. Books by Anthony Giddens and novels by the popular writer Gong Ji-young were among the publications that remained after the police confiscation. Kim’s daughter left a message for him on a bulletin board which read, “Keep your chin up, daddy.”
Kim’s lawyer says his client has been trapped in a legal limbo. “There is no universal, official list of banned books,” he said. “If he wanted to propagate the books, he would have just offered them for free.” The lawyer cited a 1992 case of a bookseller who was prosecuted for selling North Korea-related books. The Supreme Court found the defendant not guilty, because the bookseller was only “making profits and not aiding the enemy.” The lawyer noted that more than a decade has passed, but Kim is facing the same charges.
Park Jin, an activist with the Dasan Human Rights Center, condemned the police for “wielding power based upon an old-fashioned set of ideas.” Park and several fellow activists held rallies protesting Kim’s detention.
“The police department dealing with National Security Law violations opened this case so they could show their bosses that they still have some work to do, even during a thawing period in inter-Korean relations,” said Park. Kim’s lawyer has some sympathy with Park’s view. He says that the raison d’etre for the security police and allied prosecutors has been shaky since the 1990s.
Park said that her group wants the National Security Law abolished, along with the police and prosecution departments that deal with cases under its statutes. “Even the United Nations issued warnings about the law,” Park said. “I just cannot believe that people are still being held in jail under this antiquated law. If the police are that worried, they should go to any downtown bookstore.”
Park said that the core of the problem lies in the arbitrary nature of the law’s application. “The books themselves are not the issue here,” Park said. “When somebody that the police dislike happens to carry a suspect book, it gives the police an excuse.”
The French philosopher Voltaire once said, “I may not agree with what you say, but I will fight to the death for your right to say it.” Nobody in Kim’s case seems ready to back Voltaire’s vision of what a true democrat should be.
The police request for Kim’s detention cites the “facts constituting a crime,” and says that Kim “possessed documents that were produced with the goal of praising, encouraging and propagating the activities of an anti-state group.”

A police officer engaged in this case said, “Kim committed a dangerous crime, by having and selling books that were found to have been publications that benefit the enemy.” The police officer, who refused to be named, cited “The History of the Russian Revolution,” saying that it was judged by the courts in 1994 to be a publication that gave “aid to the enemy.”
The officer, who described himself as “relatively liberal-minded” among his colleagues, continued, “The National Security Law is still on the statute books and we still have to abide by it.” Regarding the complaints that the judicial precedents that declared Kim’s books to be dangerous are now out of date, he said, “A thief is still a thief regardless of the time of his crime. The age of the judicial precedents does not matter here.” The officer rejected the claim that our society has matured enough to tolerate such books saying, “There is no verifiable data to prove how mature our society is.”
The law does still exist, and not everyone sympathizes with Kim. Go Mi-seon, a 24-year-old college student, shrugged and said, “I think Kim cannot be free from blame.” She added, “After all, he was a grown-up and learned man and he should be aware of the fact that those books are banned by the law, at least until the law is repealed.”
Park said that the abolition of the controversial law is now a matter of urgency. Even some conservative civic groups see the need to revise the controversial statutes by removing Article 7 from the National Security Law. Choi Hong-jae, a director of the conservative Liberty Union, said, “The law that protects our country from North Korea should remain, yet some controversial articles that have been misused should now disappear into history.”
Kim, meanwhile, says he feels completely exhausted after his ordeal. “I just want to take a good rest now,” he said. “At least I figured out that jail is the last place you want to be. I hope I am the last person to be arrested for violating the National Security Law.” But even after his incarceration Lee is not ready to bid goodbye to his books. “I will keep selling the books online,” he said. “After all, this is a free country.”