[Talk of the town]Cut to the vows

[Talk of the town]Cut to the vows 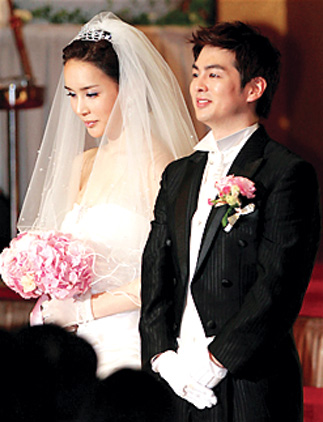 Ha Ri-su, a celebrity transexual singer and actress, had tears in her eyes last Saturday when she walked down the aisle. It was a dream-come-true day for Ha, who chose to change her sex in 1995. She asked her surgeon, Kim Seok-gwon, who was in charge of the operation, to officiate at the wedding ceremony.
Ha, 32, had a press conference before the wedding. “I want to be a good wife, who cooks well,” she said. “I want to be sexy but also a friend to my husband.” Ha said she plans to adopt two boys and two girls. “I wanted to adopt 10 kids, but my friends talked me out of the idea,” Ha said.
Ha’s husband, Mickey Chung, a 27-year-old singer and rapper, said, “I have never seen her this beautiful. I just can’t take my eyes off her.” Ha reciprocated by saying, “He looks so handsome today, because he is now my only man.”
Press reports say the couple first met while enjoying an online game in 2005. They went through a breakup and then got back together. The couple separated when Ha started dating a different boyfriend last year.
The couple flew to Thailand for the honeymoon and the couple’s parents went with them, at Ha’s request.