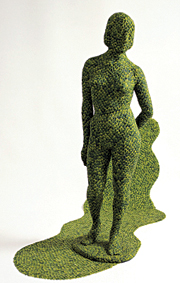 Artists are constantly searching for colors that express the themes of their work. Vincent van Gogh might be represented as dark blue, Pablo Picasso as yellow. The well-known Korean sculptor Park So-young would probably choose green.
To find out why Park is awash in green, visit her exhibition, “Over and Over,” at the Kim Chong-yung Sculpture Museum in Pyeongchang-dong.
The moment you step inside the exhibition hall, everything is green because the work on view is plastered with the leaves.
In addition to the green, these works are also distinguished for both their creativity and the labor required to make them. The artist used artificial leaves from China and she glued the leaves in intricate patterns over common objects to create new shapes of her own.
Most of the materials used in Park’s work are ordinary ― daily items such as antennas, toilet seats, and coatstands. She visits secondhand stores and looks for things that can be turned into something completely new. Then, the objects are transformed into sculpture in ways that make it difficult to even guess the original function or shape of the object.
“In this exhibition, Park questions the boundaries of sculptural arts and the identity of the sculptor,” says Bae Soo-hee, the curator of Kim Chong-yung Sculpture Museum. “Her humorous yet serious works leave a question mark for visitors too.” 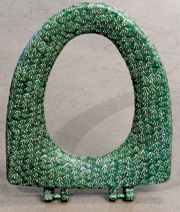 “A Young Girl.” By the organizers

Perhaps, the most unique and innovative piece is an installation titled, “A Young Girl.” It is most odd because of the explanation offered by Park: “One afternoon, we had installed a new bidet in our bathroom. When the replacement was done, the installer was about to leave, taking with him the old toilet seat,” says Park. “‘Wait!’ I shouted; this could be turned into some great art!” This is how a discarded toilet became “A Young Girl,” named for the shape the piece resembled after leaves were applied to form the face of a young woman with a short hair style from the 60s.
Thousands of leaves were also used to make “Eighteen Years.” The piece was actually a sculpture of a nude woman done by Park when she was a graduate student at Sungshin Women’s University many years ago. Since it was so large, it was hard for her to move, but even harder to throw away, so she kept lugging it from place to place. 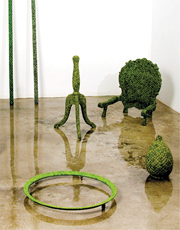 Park so-young uses ordinary objects for her pieces. By the organizers

In 2000, as she was searching for new creations, two things came to mind: leaves and the nude woman. Eighteen years had passed since the first version was made but she recreated it for this show.