Orchestral maneuvers with body parts plus moments of madness

Orchestral maneuvers with body parts plus moments of madness 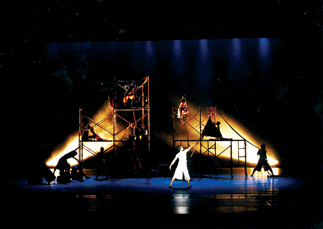 “Without You,” presented by the Mil-le Modern Dance Group. Provided by the organizers

A man flops down askew to the stage, gazing emptily ahead. Next to him sits a TV monitor, which shows real-time images of him being filmed by a video camera.
The image on the monitor is the one that stares the audience in the face. With time, the difference between the real person and the image blurs.
Canadian dancer Benoit Lachambre will present this avant-garde solo performance, “Endless Madness,” at the International Modern Dance Festival in Seoul.
Running from June 1 to 12, the festival is entering its 26th year.
This year, 21 performances from different nations, including France, Japan and England, will be offered, along with some Korean modern dance presentations.
Lee Seo-yeon, the festival’s organizer, said the performances this year are focused on “finding the origins of dancing through body movement and philosophy.”
The opening is “Dust of the Sun” by the French choreographer and dancer Josef Nadj, which gives a mysterious and dreamy interpretation of the theater of the absurd.
Organizers also recommend “Both Sitting Duet,” by the British duo Jonathan Burrows and Matteo Fargion. The pair will present an orchestral music performance using only their fingers and other body parts, without instruments.
Elaborately choreographed sets of body movements create the music the organizer Lee explained.
Korean performers will be featured, including a mixture of pantomime and thrash metal sounds in “People in the Showdown,” by the Lumen Pantomime Dance Theater. 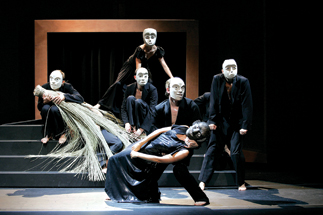 “Dust of the Sun,” left, will open the dance festival. Provided by the organizers

Joint works of Korean and Japanese dance performers will be staged, such as “Don’t (With Shadow),” led by Kim Sung-yong, which consists of a combination of music, dance and video art.
“The Othello Syndrome” by Lee Young-chan questions how much people can trust each other, borrowing ideas from the Shakespearean classic.
At some selected performances, the audience can talk to the performers.
They include the June 2 performance by Josef Nadj, the June 4 performance by Burrow and Fargion and the June 7 performance by Lachambre, among others.


The main venue is the Arts Council Korea Arko Arts Center in Daehangno, with some performances taking place at Mary Hall, Sogang University in Sinchon, both in central Seoul.
According to the organizers, English speakers can get reservation help by calling (02) 765-5352.
For more information, visit www.modafe.org (English available). Ticket prices vary from 30,000 won ($32) to 90,000 won.