Korean studies in search of some respect

Korean studies in search of some respect 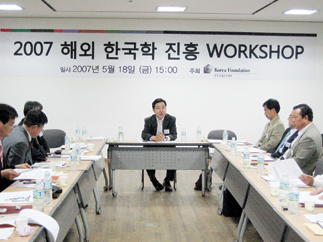 Professors of Korean studies pondering whether they should call their discipline by a different name. Provided by the organizers

The Korea Foundation has had a substantial role in research activities at universities across Europe, Asia and North America. It has also been a major source of funding for Korean studies and Korean language professorships. But it has a long way to go before Korean studies is established as an essential discipline for centers of learning.
So how can Korea develop a strategic alliance with China and Japan to create a triangular forum for East Asian Studies?
At a seminar last Friday, attended by the foundation’s advisors, there was an attempt to reevaluate Korean studies in light of this question.
Kim Hyoek-rae, a professor of Korean Studies at Yonsei University’s Graduate School of International Studies, said that Korean studies needed proper positioning within the wider field of East-Asian studies.
“Korean studies cannot exist independently, they must be situated within EastAsian studies,” he said. “We need to look at Chinese and Japanese studies and develop comparative strengths in those areas. By gathering experts within Chinese and Japanese studies, we must guide them so that their expertise expands to include Korean studies.”
Kim admitted that Korean studies do not meet the most rigorous standards of North American universities, compared to the scale of Chinese and Japanese studies, due to a lack of professors and inadequate text and audiovisual materials which are not up to global standards.
“Through policy governance, we need a systematic revolution that does not simply mimic the development of Chinese or Japanese studies,” he added.
But others seemed more concerned about expanding the scale of research funding, which is currently focused on North America and Europe.
Kim Dong-taek, a research professor of the Academy of East Asian Studies at Sungkyunkwan University, pointed out that the real problem in the development of Korean studies is “the mismatch of supply and demand.”
Currently 735 universities in 62 nations around the world have a curriculum or a research program that is related to Korean studies. Last year, the foundation gave $3.2 million to set up a center for Korean research at the University of Toronto, the largest investment by the foundation so far.
The distribution of funding, however, is uneven, Kim Dong-taek said, considering that most students who end up joining the international studies program in local universities are from Southeast Asian countries, to which the foundation has given a smaller amount of money relative to North America.
“There is a tendency to focus funding in countries that are academically advanced,” he said. “We should shift our perspective.”
Lee Seong-hyeong, a professor of Latin American studies at Ewha Womans University, raised the issue of Korean books, saying that those chosen for translation into foreign languages are “too serious.”
In the case of Latin American studies, Lee said that it began by tackling security issues, and then spread to the humanities. Others said it would be a good idea to shift attention away from the phrase “Korean studies” as a way to trigger research interest in Korea.
Kim Hyoek-rae suggested that the foundation should seek ways to create synergy among Korean experts by creating a strategic network between research groups related to Korea, by providing special workshops on Korean security within the Platform Research Institute of Korean Security and the East Asian Institute.
Kim Dong-taek added that Korea should face the reality that it’s an important country among the nations that share its economic interests, but it is not important enough to be dealt with as an independent academic subject, something which can only be changed by building bridges.