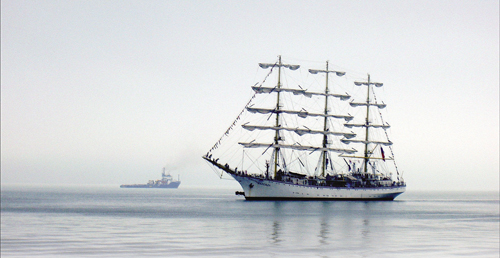 The Russian sailing boat Nadezhda seen from Odong Island. The ship was participating in the annual International Tall Ship Festival. By Moon So-young

On a rainy day, it’s hard for Yeosu’s visitors to see the famous turquoise blue sea that surrounds the port city ― but it’s also hard to find anything desolate about the place, even in gloomy weather. For a start there’s the shoreline that bends elegantly to make the beaches small and cozy, then there’s the tiny green islands scattered here and there.
Yeosu is a tidy city with neat seascapes ― at least that was my impression on a cloudy weekend visit to the south coast of city, which is now dreaming of an international exposition.
“Yeosu has seen better times, when it was a center for the fishing trade,” said a taxi driver who took me and my companions downtown. “Back then people said, ‘Don’t try to brag about your money in Yeosu and don’t show off your looks in Suncheon [a neighboring city famous for its beauties].’ We expect the Expo to help Yeosu regain its stature.” As he spoke the taxi passed a tower covered with replicas of the city’s flowers, red camellias, built to promote the city’s bid to host an international exposition in 2012.
The flight from Seoul to Yeosu took 40 minutes. We tried to rent a car at the Yeosu Airport, but there were none left. To get a rental car on the weekend it’s imperative to make reservations, although we were able to find a car to rent in the city itself.
When we reached Yeosu New Port near the downtown area, the city’s first International Tall Ship Festival was in progress. It is part of a series of events designed to show off the city’s potential as a center for tourism and watersports. We were told that two large sail boats from Russia and one from China had been invited to the event. One of the Russian ships, the Nadezhda, was at anchor, while other sail boats floated elegantly in the distance. For those who are fans of novels like “Treasure Island” and the “Pirates of the Caribbean” movies, like me, it was a treat to look at the magnificent ship with its three tall masts. 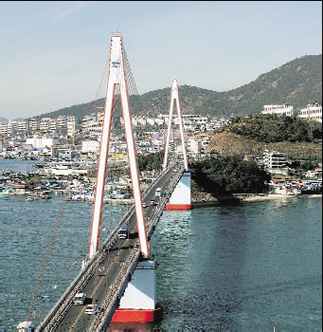 But the boat seemed reluctant to display its white sails, just like a gorgeous peacock that tantalizes spectators by keeping its tail furled.
“The ship will unfurl its sails when it leaves the bay for the race,” a female guide told me.
“So where can I see the race?” I asked. “Well, you might see it at Odong Island,” she said, seeming a little perplexed. “But then it could be hard to see it there as it’s overcast.”
“When do the other sailing boats come back to the harbor?”
“Well, just a minute,” she stuttered. Like the other guides around me this ajumma was kind and eager to help, but she seemed unfamiliar with the protocol of big sailing events.
“This event is going to be annual and another one will take place next year and it will be organized more smoothly,” she explained, optimistically.
Finally, Nadezhda departed and we ventured to Odong, a tiny island connected with the port by a path over a small bridge. You can walk along the path or take a small train.
On the little island there is a musical fountain and models of the geobukseon (turtle ship) with which Admiral Yi Sun-shin, a Joseon Dynasty hero, defeated the Japanese navy in the seas around Yeosu.
The true beauty of Odong is not unveiled until one climbs up the island’s main hill. After climbing a steep wooden stairway I found myself walking though a dense forest of camellia trees with elegantly bent trunks and thick leaves that had a fine luster.
Yeosu’s camellias are at their best in March and one of the nation’s most famous camellia festivals is held at that time. But many trees still had a few big camellias with red petals and golden stamens and there were many scattered over the ground. 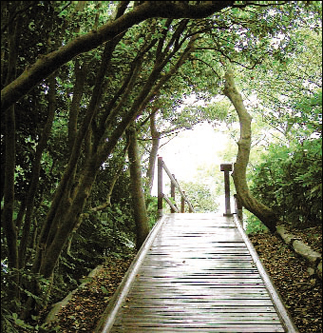 The Camellia forest on Odong Island By Moon So-young

When I reached the island’s observatory, I saw Nadezhda going around the island with half of its white sails unfurled. It was the second gift the island had given me ― and ocean cliffs just like those in old Joseon-Dynasty paintings and a cave amid the rocks, known as “Dragon Cave,” were the third and fourth.
Next we went to Manseongni Beach, a famous spot for bathing just north of the new port. If you go there by car you will pass through Marae Tunnel. This was completed in 1926, under the direction of Japanese colonial rule, by laborers working by hand with hammers and chisels.
The rough surfaces of the tunnel’s walls make travelers feel as if they are in a mine tunnel or an air-raid shelter.
Manseongni beach is a cozy place with black sand, which is said to be good for people’s health, because it radiates magnetic energy.
If you want some activities that do not involve ports or beaches, go to Jinnamgwan on a hill in the downtown. This magnificent Joseon Dynasty building, with numerous tall and thick wood pillars in reddish hues, was a guesthouse for officials from the central government.
It is regrettable that its furniture and attached buildings have disappeared. But the view from Jinnamgwan, one of Korea’s biggest Joseon Dynasty wooden buildings, is great, with Dolsan Bridge, the symbol of Yeosu, looming over the water and the modern buildings of downtown. 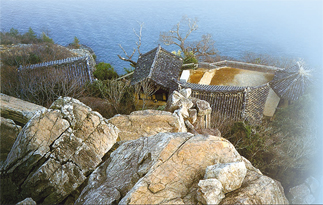 The bridge, which links Yeosu’s downtown with Dolsan island, is beloved by Yeosu citizens. Many brag about it on Internet bulletin boards, saying that visitors will never forget how the bridge looks at night.
Well, the bridge shines at night with illuminations of violet, green and other colors above the seawater, which also reflects the lights of the downtown. But I didn’t find it shockingly beautiful compared to illuminated bridges in metropolitan cities such as Seoul.
But even fastidious visitors will be impressed by a dinner in Hoe (sashimi) Town, which can be reached directly after crossing the bridge from downtown.
A 60,000 won flatfish sashimi set will enable you and your three friends to eat sashimi, boiled shrimps, sea mussels, shellfish, ascidians (sea slugs), chili fish soup and even some pieces of live octopus. There are good views of the port and sea and it’s impossible to leave feeling hungry. 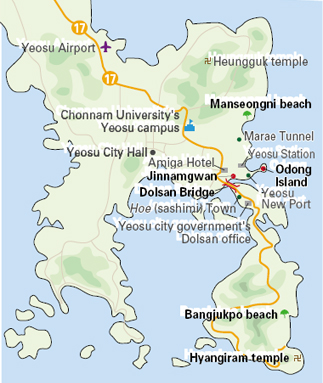 Another good place to eat is Gyejang street in Bongsan-dong in the downtown area. Here you can eat gyejang, small crabs preserved in soy or chili sauce with side dishes for 5,000 won per person. (Of course, it is difficult to eat more than one bowl of gyejang, because it is so salty and spicy.)
Hyangiram, a small temple in the middle of the mountain slope on the southeastern coast of Dolsan Island is another place that one should not miss.
Getting there involves a beautiful drive along the eastern coast of Dolsan Island. On the way to Hyangiram, you can stop at Musulmok and Bangjukpo beaches. Both are small and neat with white sand and are surrounded by pine tree forests.
The temple is known as one of the most beautiful places in Korea from which to watch the sun rise.
A sunrise festival is held on the last day of every year, and many visitors from all over the nation gather here to watch. But Yeosu’s sunrises are an event at any time of year.