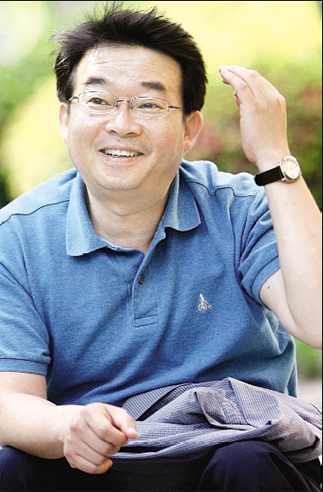 The 100th impression of a fairy tale for adults, “Salmon” (published by Munhakdongne) will be printed next week.
It has been 12 years since the first impression was published in March 1996.
“Salmon” has been printed more than 100 times, but has sold 750,000 copies at the most.
“Salmon,” however, created its own genre ― fairy tales for adults. Because of “Salmon,” many kinds of plays and songs were created in Korea.
Further, salmon became a very familiar fish to Koreans, like a mackerel or a hairtail. I asked Ahn Do-Hyun, 46, who is the author of “Salmon,” a few questions about the success of his books.
Q. Congratulations. Did you expect to succeed like this?
A.I did not. I thought it would be successful if 3,000 copies were sold. Still I am curious because “Salmon” has never been a big hit. More than 100,000 copies were sold in the first year, and it has been selling 5,000 to 50,000 copies a month steadily for more than 10 years.

In fact, “a fairy tale for adults” which became a commonly used term originated from “Salmon.”
It was developed for the name of the series by Gang Tae-hyung, who is the co-president of Munhakdongne with me. Actually, it is a nonsense coinage.
Nevertheless, I did not think of it as pioneering. At that time, I heard that the sales department of the publishing company was perplexed. Since it was difficult to categorize it as juvenile literature or adult literature, they had a hard time with marketing.

Can you explain more concretely the meaning of a fairy tale for adults?
“We read children’s stories during our elementary school days and selections of world literature, such as “Demian,” when we were in middle school. I estimate that a fairy tale for adults will be the stepping stone between those time periods.
Honestly, I wanted to write books like “Le Petit Prince” from my days as a literary youth. It was aimed at women readers in their 20s at first, but now the class went down to teenagers.

Do you mean that the book found its own class of readers by itself, as salmon go back to their birthplace to lay their eggs and die?
Recently “Salmon” was put on the list of recommended reading for most middle and high schools. It might help I think. This fact proves that “Salmon” is not a book to sell out, in other words, not a planned work of commercialism.

Let us talk about some of the criticism of “Salmon.” It is been suggested by some that the success of “Salmon” has softened literature.
I know that. It is valid criticism from the point of view of a novel.
However, from the very beginning “Salmon” was not a book aimed at adult readers.

What is “Salmon” for Ahn Do-hyun, individually?
I was compulsorily retired, being a member of the Korean Teachers and Educational Worker’s Union and reinstated in 1994
It was not until then that I wrote books. When I was reinstated, I was planning to quit the teaching profession because I was disgusted with schools.
When I became a full-time writer, “Salmon” was a great help to me economically and emotionally. That is why I appreciate it.
However, from day one I have been recognized as the writer of “Salmon.”
I do not like it. I am a poet. I mostly write poems.