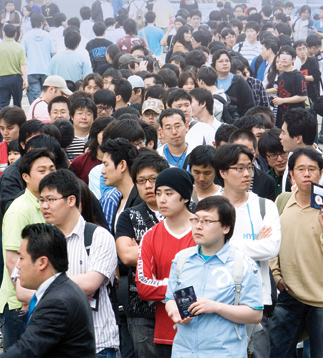 Fans crowd the venue for a two-day game festival hosted by Blizzard. The firm’s StarCraft is one of the most popular games in Korea. By Shin In-seop

Korea’s e-sports scene is heating up along with the weather, as major tournaments are taking place, headed for late-summer finals. But the surprise announcement that a new edition of StarCraft is coming is stealing the spotlight and causing both excitement and apprehension in the gaming industry.
Although electronic sports, or e-sports, embraces 28 games ― with the latest addition being Dungeon and Fighter ― StarCraft accounts for the bulk of the action. The largest StarCraft tournament for teams, the Shinhan Pro League, is well underway, with the Korean Air Force team achieving a surprising three victories in nine games. Led by the legendary Lim Yo-hwan, whose gaming career has evidently not stopped despite being drafted into the service, the team is currently in 11th place.
The Shinhan Pro League ― formerly the SKY Pro League until its sponsor Pantech went under debt restructuring ― is only one of the many StarCraft tournaments taking place. The games are also on the Internet and on three cable television channels devoted exclusively to computer games.
Taking the local games industry by surprise, Irvine, California-based Blizzard Entertainment announced during a game festival held May 19-20 that StarCraft 2 would soon make its debut. Blizzard, the maker of the original StarCraft, chose Seoul as the venue for the new game, but that is hardly surprising since Koreans account for roughly half of all global StarCraft sales. But the prospect of a new blockbuster game ― regardless of the fact that it will take a couple years to get here ― was enough to send the share prices of local game companies Ncsoft, Webzen and CJ Internet down when the market opened after the weekend festivities. 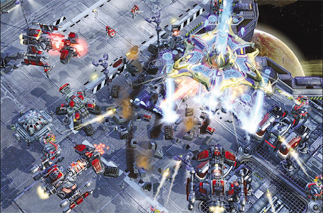 A screenshot of StarCraft 2. Provided by Blizzard

More interested than investors are actual gamers and the e-sports industry, because no one is sure whether StarCraft 2 will be able to take over from the original StarCraft.
Although the game is yet to be released, many gamers expressed disappointment at the slightly slower movement of the units in a demonstration video, although Blizzard developers said that the speed had been toned down for demonstration purposes.
Korean gamers are showing heightened sensitivity to StarCraft 2 because StarCraft itself had once been threatened by the release of WarCraft 3 in 2002. At the time, most StarCraft players converted to WarCraft, but the game wasn’t able to win players over for the long haul and they eventually went back to StarCraft. WarCraft is now just a minor part of the e-sports scene.
So what is this StarCraft 2 all about and will it live up to the hype?
The game’s story takes place four years after StarCraft’s Brood War, and protagonists from the original game, such as Zeratul, Kerrigan, and Jim Raynor reappear.
The game maintains the three main breeds: the alien-like Zerg, human-like Terrans and highly intellectual Protoss. Some have new abilities and a few new units were added, including several for the Protosses.
The majority of the game-playing is mostly the same, except that the graphics are entirely rendered in 3D.