In spices and vegetables, the essence of Korea

In spices and vegetables, the essence of Korea 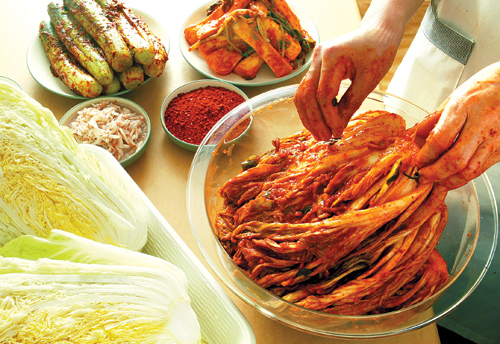 22nd in the series | Kimchi

The fact that kimchi (a fermented dish made of seasoned vegetables) is one of only five Korean words in the Oxford English dictionary is quite telling. The spicy side dish, most frequently made with cabbage, is one of the few cultural assets of this country that are well known outside of Korea. There aren’t many Koreans who can live without it, so much so that Pizza Hut in Korea, upon request, will serve kimchi as a side dish. Electronics companies sell special “kimchi refrigerators,” which were developed to store kimchi at the ideal temperature for proper fermentation. Korea without kimchi would be like America without ketchup.
Korea has been an agrarian society for most of its history, and its diet relied heavily on vegetables. Its cold winters made cultivation difficult for months on end and storage methods had to be developed to ensure an uninterrupted food supply. Experts differ over the exact moment when kimchi was born but most trace its development to the agrarian culture before the Three Kingdoms era, in the 4th to 7th centuries. Early Chinese records, including “Samgukji” (Record of the Three Chinese Kingdoms) say “The people of Goguryu heritage have an aptitude for making fermented foods.”
Linguistics scholars say that the word kimchi probably originated from two Chinese characters, chim and chae, which, together, mean “salting vegetables.” Over the years, this term underwent various changes, going from dimchae to kimchae and, then, to kimchi.
The earliest form of kimchi was a bit different from today’s product. “Before red peppers came into Korea after the Japanese invasion in 1592, kimchi was basically a salted vegetable, the salting process being solely for the purpose of preserving the vegetables,” said Shin Hae-won, the chief curator at the Kimchi Museum in southern Seoul.
During the Goryu Dynasty, Korean cuisine was still dependent upon vegetables. This era saw many kinds of vegetables begin to appear, including radishes, eggplants, cucumbers, Korean leeks, dropwort, mallows and fernbrakes, among others, all of which were used as main ingredients for kimchi. A new method of making kimchi developed when dongchimi, pickled radish in salt water, started to become popular. Unlike other kimchi forms, dongchimi contains the soup that the vegetable was pickled in. Eaten chilled, the dish is still a favorite form of kimchi, especially during the summer.

In the Joseon period, more efficient forms of farming were introduced, accelerating the popularization of various kinds of kimchi. Some meats, mainly pheasant and fish, were introduced to kimchi dishes.
“During this time, kimchi became more than just a side dish, it was on the main menu, especially among commoners,” said Shin.
During the 17th century, in the mid-Joseon period, peppers became the main spice used for the dish but it was only during the latter part of this period that the kimchi we are familiar with today became a staple food among Koreans. That was when peppers, fish stock, garlic, scallions and ginger began to be found in kimchi more frequently.
Kimjang, the fermentation and storage process, is key to the development of kimchi. Before kimchi refrigerators, Koreans used wells and brooks to ferment kimchi during the summer and buried it underground during the winter. They would pack the kimchi tightly in a deep pot, to avoid acidification, and cover the lid with straw.
In 2007 it is safe to say that most Koreans under 50 do not know how to ferment kimchi. And it would be silly for most to do so, with kimchi refrigerators evolving to new heights. Samsung , with the help of Pulmuwon, has developed a kimchi refrigerator in which the owner can choose three stages of fermentation.
By pressing a button, owners can choose how to ferment their kimchi, nuisance-free, and retain that flavor for months to come.
These specific degrees of fermentation are also used in the government categorization of kimchi. Earlier this month the Agriculture Ministry announced that they will be dividing kimchi products into three levels, based on the degree of fermentation, from non-fermented to over-fermented. The ministry also said it plans to rank kimchi’s spiciness on a five-point scale; mild, slightly hot, moderately hot, very hot and extremely hot, based on research by the Korea Food Research Institute. These rankings were introduced as a way to stabilize kimchi culture and to provide a basis with which to properly judge the condition of manufactured kimchi. The government revealed that it will encourage local manufacturers to adopt this standard later this year.
Kimchi began to spread into international markets when first generation Korean emigrants who had settled in Japan, Russia, Hawaii and China began importing it to their new homes. Then came kimchi’s “big bang.”
“Kimchi became an internationally renowned product with the 1988 Olympics [which were held in Seoul],” said Shin. “With the publicity from the games, kimchi started becoming more and more popular among foreigners,” said Shin.
The biggest controversy surrounding kimchi happened in 1996, when Japan suggested that kimuchi, or Japanese kimchi, should be an official food at the Atlanta Olympics. This sparked anger among many Koreans who felt that kimchi should be seen as a Korean national treasure. Around this time, almost 90 percent of South Korea’s kimchi exports went to Japan, according to the Korean Ministry of Agriculture and Forestry. Another important aspect of the row was the quality of kimuchi which, in the eyes of Koreans, was a cheap version of kimchi because it skips the fermentation process. The Korea Food Research Institute emphasizes that Korean kimchi is stored and fermented for at least four to five weeks, whereas Japanese kimuchi is not a fermented product and has artificial flavors instead of the various spices used in kimchi.


“In some aspects, kimuchi is more foreigner-friendly, in that it doesn’t smell as much as Korean kimchi, which is fermented for several weeks at least,” said Shin. “But as to the health benefits, kimchi is far more nutritious, as the fermentation process creates lactic acids.”
The health benefits of Korean kimchi has been frequently praised in numerous Korean and international publications. It contains high concentrations of calcium, iron, phosphorous, vitamins A, B and C as well as amino acids. It is low in calories, low in sugar and reduces cholesterol levels. Some research suggests it may help to prevent colon and gastric cancer. It is also known to cleanse the intestine, improves the immune system and suppresses mutagen and carcinogens.
The popular American magazine “Health” recently picked kimchi as one of the five healthiest food products in the world, along with olive oil, soy, yogurt and lentils. The magazine praised kimchi for “being loaded with key vitamins and healthy bacterium that aid digestion.”
“The peppers in kimchi activate the healthy movement of the stomach,” said Jing Ji Chun, chief professor at Dongguk University’s department of Oriental Medicine. “And the garlic, capsaicin and ginger help reduce body fat.”
Kimchi appears in many Korean dishes, including kimchijjigae (kimchi stew) and kimchi fried rice. Chilled kimchi is a popular dish to cure hangovers and kimchi burgers can be found in fast food chains like Lotteria.
Various government departments in Korea are now working to market the product around the world. There are kimchi expos and kimchi forums held every year to popularize the dish. Park Jong-chul, a professor at Sunchon National University, who organized the Kimchi Symposium that will held at the university this Thursday said, “Domestic demand is important but what’s crucial is to differentiate Korean kimchi from the Japanese or Chinese versions and make its superior quality better known.”
“On busy days, more than 600 people visit the kimchi museum, around 40 percent of them being foreigners. There is a continuous interest in this fascinating dish,” said Shin. “It’s up to us [Koreans] to connect the superiority of this dish with the right marketing strategy and promotional image.” jainnie@joongang.co.kr

How to make baechu (cabbage) kimchi

Method:
1..Wash the cabbages and cut away any shriveled leaves. Cut the cabbages in half vertically.
2..Prepare a bucket of water with salt (use a water to salt ratio of five to one).
3.Soak the cabbages in the salt water for five to six hours.
4.Wash the cabbage again and squeeze out excess moisture.
5.Julienne the radishes
6.Cut the leaf mustard, dropwort and green onions into bite-size pieces and put them in water.
7..Mix all vegetables from step 5 and 6 (except for the cabbages) with the red pepper powder, pickled shrimp, pickled sand eel, chopped garlic and ginger.
8. .Put the above mixture (step 7) in between leaves of cabbage arranged in layers.
9..Store in a container or pot and refrigerate for as long as required for the desired level of fermentation.