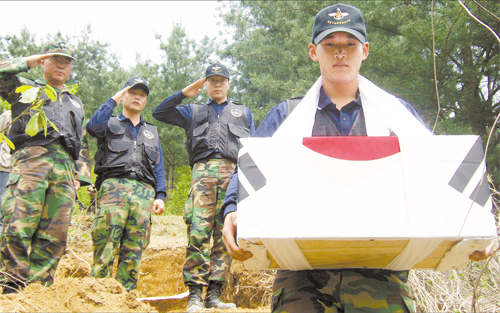 From left, Lieutenant Colonel Lee Yong-suk, First Lieutenant Kwon Jae-woo and another soldier salute the bones of a soldier killed during the Korean War. Lee and his crew roam the country as a team of bone collectors. By Kang Uk-hyun

HONGCHEON, Gangwon ― Seo Byeong-chan was just 14 when he saw a crow pecking at the dead body of a South Korean soldier. The body was starting to rot under the summer sun, lying on a mountain high above the rice paddies of this small farming town. It was the height of the Korean War, and Seo was on his way to his aunt’s house on the other side of the mountain. Awed by the sight, Seo could do nothing but dash to his aunt’s house.
Almost six decades have passed, yet the memories remained. Now a 71-year-old with crow’s feet around his eyes, Seo said the memories have weighed on him for years.
“I tried to keep the memory of the place where the dead body was,” Seo said, “but it kept fading away.”
Earlier this year, fate stepped in. Lieutenant Colonel Lee Yong-suk happened to drive through the neighborhood. Lee, the director of the Defense Ministry team that excavates the bones of dead soldiers, came to Seo’s house to ask the aging man questions. Lee said he felt the need to stop his car when he was passing the mountain.
Calling himself a “soul searcher,” Lee said, “I was just driving by the village and had this weird feeling that I had to stop. This sounds odd, but I believe that the spirit of the dead soldier stopped me.” Lee usually uses his knowledge of war history to trace soldiers’ remains, but he sometimes depends on his sixth sense. Lee has worked in his job for almost a decade.
A few weeks after their encounter, a search and exhumation began on a recent Tuesday this month. 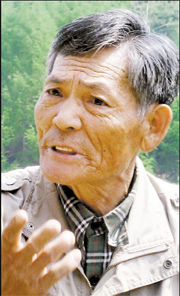 Kwon Jae-woo, 36, a first lieutenant, carefully grabbed a skull with his gloved hands, then took a thin metal spatula and stamped a lump of dried clay from holes in the bone, which may have been the eyes. He used a gentle touch to brush dust and soil from the bones. Sometimes he needed to use pruning shears to cut tree roots twined around the bones. He used a brush to gently clear dust off the bones. Eroded buttons and a metal buckle proved the bones belonged to a soldier, yet there was nothing else left to tell who the deceased was. All that remained were bones, soil and plants that went through decades of erosion together.
At about 10:30 a.m., after two hours of searching and digging, the bones were brought into the sunlight after 57 years underground. Kwon and other soldiers on Lee’s excavation team first estimated the location with the help of Seo. Walking and sometimes crawling, they reached the site of the dead body on a hill. It was covered with bushes, trees and grass. Seo stood by the site, with his frisky little dog, Cookie, to witness the excavation of the soldier’s body that he saw 57 years ago. The curious dog climbed the steep hill with his tail wagging, yet he stopped short near the bones and became still. “Clever little doggy,” Lee murmured, his voice hushed in respect for the dead.
For the excavation work, Kwon started by partitioning the probable site, pruning and cutting the brush and then digging with pickaxes and hoes. In case it was hard to detect the bones, he sprinkled water at the site, which then showed their outline. When he reached a piece of a bone, he stopped briefly and examined the placement to predict the direction and angle of the buried skeleton. As the digging got near the bones, the soldiers used smaller tools to provide a finer touch. “We have to be careful, because some bones just crumble into tiny pieces when touched,” Kwon said.
Kwon and his crew said that they were quite lucky that day, because the bone structure was preserved in fair condition. “The nature of the red soil helps keep the bones relatively intact,” Kwon said, carefully examining the lumps of clay with his hands. “This spirit is lucky, at least compared to others whose skulls are smashed into indistinguishable bits and pieces.”
Eroded among soil and plant roots, the bones almost have the same color as the red soil. The rough surface felt like the bark of a tree. Years of experience gave Kwon the knowledge to tell pieces of small, crushed bone from small stones and pieces of tree branch, which look similar. Soil was piled up at one side, which would later be sifted for tiny pieces of bone or teeth too small to be found by the excavators.
Several teeth remained attached to the jaw, and Kwon said that the dead soldier appeared to be in his late teens. Examining the teeth, he said, “From the degree of wear on the teeth, we can tell that this person was a teenager.” From the size and thickness of the pelvic bone, Kwon said it was a boy.
The mouth was wide open as if he was in pain and the arms were folded, protecting the chest. Lee, who was supervising the excavation, murmured, “He seems to be shouting at us, scolding us for not finding him sooner.”
In a finishing touch to the bone-collecting mission, Kwon had his crew lay pieces of traditional mulberry paper on the ground and put the skeleton in order for a photographic record. The bones were then collected in a box and wrapped with the national flag.

Top to bottom: Soldiers excavate and exhume the bones of a dead soldier buried for 57 years in Hongcheon County, Gangwon. Once the bones are collected, they are put in the hands of forensic scientists and archaeology scholars for identification. By Kang Uk-hyun / Provided by the Defense Ministry

Earlier that day, to the reporter en route to the exhumation site from Seoul, Lee said, “Don’t forget to bring some pieces of bread and Coke. It’s for the dead soldier. He must have been so hungry, buried under the soil for 57 years.”
Lee had a good reason to give the order. He put the box of bones on the ground and had his crew stand in a line before the box. “You have had a hard time, sir,” Lee said, sprinkling the Coke gently around the bones.
Putting the bread on an altar, made on the spot with a wooden box, Lee and his squad made a low bow, as in a traditional Korean memorial service for the deceased.
The day’s mission ended with the ceremony, and the soldiers saluted the box of bones.

Once out of the soil, the bones made the journey for identification. The skull from that Tuesday excavation had two small holes in the forehead, and Kwon said they might have been bullet holes. It’s now the job of the archaeologist, Professor Park Sun-joo of Chungbuk National University, to see if they are made by bullets.
Park described his job as that of a “physical anthropologist.” He tries to detect as many traces as possible to identify the deceased. Park starts his job by cleaning the bones with acetone to get rid of dust and other foreign matter.
It’s his responsibility to gauge the height, sex and age of the deceased, using measuring tools and mathematical formulae. He uses a regression formula to calculate the height from the size of the pelvic bone, for example.
He then records the data from the bones on charts and hands them over to the Defense Ministry. There are bones that were found to belong to the North Korean and Chinese troops that fought against South Korea, and they were entombed at the cemetery exclusively for enemy troops, Park explained.
The next step is DNA identification, and the bones now travel to the forensic medicine expert, Professor Shin Kyoung-jin at Yonsei University. Shin gets a fraction of bone and grinds it into powder for the process. It is a difficult process, because there is hardly any genetic material left in the decomposed bones.
“Most of the doublehelical structures of the DNA extracted from the bones are broken, which makes it costlier and more difficult,” Shin said.
Once the DNA is extracted, Shin clones the DNA to enable the analysis. It takes about 1.5 million won ($1,616) to conduct the DNA testing, Shin said, and the money comes from the ministry budget.
“It’s a race against time,” Shin said, “We have to find the bones before time takes away the information needed for identification.”
Shin said that the excavation of the dead soldiers contributed to the development of forensic medicine. “It is not an exaggeration to say that Korea’s gene technology is at the world class level, and the bones of the dead soldiers made quite a contribution,” Shin said.
The Defense Ministry estimates that some 135,000 bodies of dead soldiers were lost during the Korean War.
After the ministry officially launched the exhumation and identification mission in 1999, Lee said that his squad succeeded in finding some 1,700 bodies so far.
But the percentage of those identified is low, mainly because of the lack of participation of bereaved families for DNA tests.
Lieutenant Colonel Lee is disappointed at the turnout of bereaved families, yet that does not frustrate his morale.
“It’s not a dream job,” Lee said.
“It’s not fun to touch bones and think about the deceased around the clock.”
But he is a professional.
“Somebody has to do it, and we do it with pride,” Lee said. “We are the messengers for the spirits of the deceased soldiers.”