[Talk of the town]BLOG BREAKUP

[Talk of the town]BLOG BREAKUP 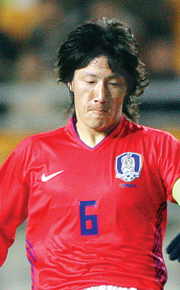 Kim Jin-kyu (22, Chunnam Dragons) and Hong Jin-young (a 22-year-old actress) announced their breakup on their blogs. A member of the national soccer team, Kim wrote on his blog, “Girlfriend? Enough for me. I will concentrate only on playing games.” The reason for their break-up is assumed to be that Hong wanted to focus on her career rather than the relationship for a while. Ever since appearing in the film, “Who Slept With Her?” in 2006, Hong has been planning her debut as a singer this summer, but it has been delayed.
Kim indirectly expressed his feelings through the lyrics of the background music for his blog: “I didn’t know how to be patient with you. I was too shy and cared for nothing but us. I can’t think about somebody else. I am too shy to say that I love you,” the song said.
Hong also chose appropriate background music: “I have a dream,” went the song. “Even if I am abandoned and exhausted, I can’t give it up. I can endure all these hardships for the day my dream comes true.”
Kim and Hong revealed their relationship through their blogs in September of last year.