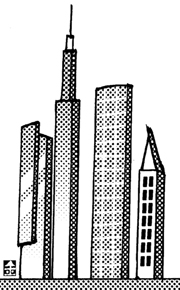 The enduring achievements of New York’s famous Empire State Building, a New York City landmark, are its height, which soars to 1,250 feet on the 102nd floor, and the speed of construction.
American Indians living in the eastern United States played a pivotal role. The hundreds of Mohawk nation iron workers included in the 3,000 workers did not have a fear of heights. They would dance on I-beams 650 to 984 feet in the air, showing particular adroitness at tightening rivets. Because of their efforts, the first 100-story building was completed in less than 400 days in 1931.
The construction of a 100-story skyscraper was unfathomable only 40 years prior, considering architects were building 10-story residential buildings at the time. The 10-story Home Insurance Company Building (1884-85) in Chicago was the first to use steel-girder construction, and it is considered the first high-rise office building. Buildings prior were stone and brick, making it impossible to rise above 10 stories because of the load.
The competition to construct the tallest building in the world grew fervent with the architectural advancements of the late 20th century. In 1972, the World Trade Center, which collapsed after the September 11, 2001 attacks, replaced the Empire State Building as the tallest building, in the world, soaring to a height of 1,368 feet. Two years later, the Sears Tower in Chicago (1,450 feet) took over that title. Later, the tallest buildings in the world came from Asia. The title of tallest building shifted quickly from the Petronas Twin Towers in Kuala Lumpur (1,483 feet) in 1998 to the Shanghai World Financial Center (1,614 feet) in 2004, and finally to the Taipei 101, which is currently the tallest skyscraper in the world (1,671 feet).
Samsung Engineering & Construction is currently building the Burj Dubai, a 160-story skyscraper, in the Middle East, which will be 984 feet higher than the previous record holder, soaring to 2,640 feet. The big cities of Korea have shrugged off their fear of heights, recently announcing plans to build skyscrapers that are at least 100 stories high. Public opinion backs the idea of constructing a 100-story landmark building that will compliment Seoul’s burgeoning status in Northeast Asia.
The New York Times interpreted the fervor for skyscrapers in Asia as being a “reflection of the intense desire to quickly become an advanced nation.” They warn against excessive impatience. It is worth noting that the United States and European nations have already transcended competition to build the tallest building and have redirected their focus to the design and practicability of buildings.