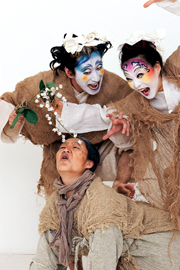 The two dokkebi hover over Dod, wife of the king of the goblins. Provided by Yohangza Theatre Company

What would happen if one of William Shakespeare’s romantic comedies took place in Korea? The answer can be found in “A Midsummer Night’s Dream,” translated by the Korean director Jung Ung-yang. Based on the play by the world’s most renowned playwright, the basic storyline stays true to the original plot. However, Jung has made some small changes, including the names of the characters.
Shakespeare’s original has four main lovers: Lysander, who is in love with Hermia, who is engaged to Demetrius; and Helena, who has a crush on Demetrius.
Since Jung’s adaptation takes place in Korea, Lysander is called Hang, Hermia is called Byeok and Demetrius is named Lu. Helena is called Ik.
In the original, Oberon, the king of the fairies, sets the trickster Puck after his disobedient wife, Titania. In this version, Dod, the wife of Gabi, the king of Korean goblins (or dokkebi), tries to punish her flirtatious husband.
Additionally, instead of a single Puck playing tricks on the four lovers, Jung’s adaptation employs two dokkebi, who are equally mischievous.
Jung’s version, according to the press release, has received standing ovations at the 2005 Edinburgh Festival Fringe, and has also taken the stage at London’s Barbican Centre, the Sydney Festival and the Hong Kong Arts Festival between 2006 and 2007.
Since its debut in 2002, the play has been performed in 38 cities in 11 countries on four continents. It has had 288 shows with a total of 73,000 viewers.
The performers are members of the Yohangza Theatre Company.
The romantic comedy will be performed at the Arko Arts Theater between June 15 and July 8. From Tuesday to Friday, the performance will be at 8 p.m. On Saturday, there will be a 4 p.m. and an 8 p.m. show. Sunday will only have a 4 p.m. performance. There is no show on Mondays.
English subtitles will be available only on the weekend shows.
Tickets range from 15,000 ($16) to 30,000 won. Tickets can be purchased through the Interpark Web site at http://interpark.com or at the Arko Arts Theatre Web site at http://artstheater .arko.or.kr. For more information, call (010) 6474-6582.