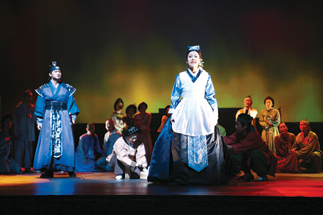 Wohn Ki-jun as Min Jung-ho and Kim So-hyun as Janggeum.

According to TNS Media Korea, the TV drama “Daejanggeum,” or “Jewel in the Palace,” attracted the greatest number of viewers of any show in 2004, with 47.8 percent of the people watching TV.
Hoping to capitalize on this popularity, MBC (the producer of the drama) and PMC Production (the company responsible for the comedy show “Nanta”), have joined forces to create a musical version of “Daejanggeum.” Han Jin-sop is directing, according to a press release from the show.
It took a total of two years and 6 billion won ($6.5 million) to create the musical production, which is now running at the Opera House in the Seoul Arts Center.
The musical’s storyline follows the plot of the 2003-2004 drama. It focuses on the life of Janggeum (played by Kim So-hyun in the musical), a female saenggaksi (a young lady of the court) who enters the palace as a royal chef and later becomes a court physician, a rare occurrence in the male-dominated society of the time.
She gains respect and admiration, but at the same time becomes embroiled in conspiracies and false accusations. Min Jung-ho (played by Wohn Ki-jun), her romantic interest, eventually clears her name.
Even though the 140-minute musical isn’t as detailed as the TV series, the actors and actresses try to make up for the limitations through songs, intricate lyrics and traditional dances, said Kim So-hyun, the main actress.
“I tried to act with great force; it was the only way to recover the details omitted from the original TV drama,” Kim said. “Despite the time limit, the musical gives the audience a great sense of movement and freshness through live music, singing and dancing.”
Among the 40 songs, 25 are fusion pieces. They combine both traditional and modern strings to create harmony in each scene.
The sumptuous colors, patterns and materials of the traditional costumes are designed to emphasize the characters’ emotions, Kim said. 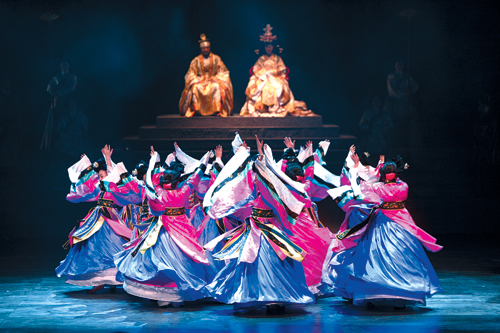 A scene in which the birthday of Queen Joongjeon is celebrated. Provided by the organizer

The final scene is particularly memorable, she said. The two main characters, Janggeum and Min Jeong-ho, who have fallen in love, depart on a boat amid a shower of cherry blossoms. The scene is designed to cap the excitement and mysticism built up throughout the play, according to the release.
“We practiced 12 hours a day for two to three months,” Kim said. “Despite the practice, we found some parts still in need of improvement for future performances, such as the arias.”