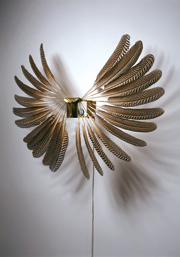 Bodily tension is this artist’s signature.
A woman stands on a white line drawn across an empty lot with a long plastic rod ― about three times her height ― tied to her head, desperately trying to maintain her balance.
In the first photograph of a series, she manages to keep her head still while holding the rod level.
By the next photograph, her head is tilted back and she struggles to keep her body taut as the rod tilts forward.
The artist, Rebecca Horn, constantly fights with the physical limits of the body in her work, questioning its imperfections.
Her art is devoted to inventing bizarre extensions, substitutes and metaphors of the body that witness or help to overcome physical restraints.
In another piece, “Pencil Mask,” she attaches pencils to a face mask to create something that looks like a bondage device.
In “Head Extensions,” the artist tries to stand still after putting on a long, pointy mask that looks like a unicorn horn.
The idea of restoring balance is a reference to Horn’s own life. She spent a year in her 20s in total isolation due to severe lung poisoning after she used fiberglass and polyester without a proper mask.
In many ways her earlier performances of body extensions, which are currently on display at Rodin Gallery, use a mechanical supplement to break free of physical restraints. Yet her later works gradually move on to deal with the way technology can be used to transcend the fragility of life. 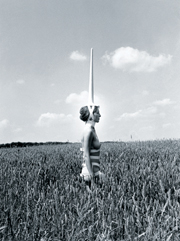 In one image, a dead butterfly in a glass case flutters its wings with the help of a gadget.
In later performances, which use bizarre body extensions, she frequently draws parallels between the human body and the bodies of insects to stress that both are helplessly weak.
In the end her works delve into fears and tensions of the body.
Her later installations continue to suggest a state of urgency and anxiety without using the body.
In her installation “El Rio de la Luna, Barcelona,” Horn presents a white room full of tangled black hoses connected to a mysterious black cabinet. The hoses serve as a visual alert as they represent crawling snakes, and the mechanical set-up of the room demonstrates a fear of explosion, death and the unknown.
Horn captures helplessness before life’s barriers in her work, and tells us that the only way to overcome fear is to describe what we are afraid of.