[TV Review]Next up, another injustice to Dick

[TV Review]Next up, another injustice to Dick 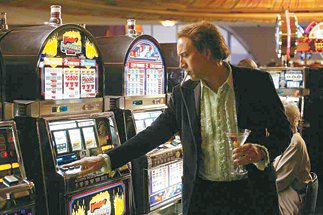 Cris Johnson (Nicolas Cage) takes advantage of his ability to see two minutes into the future.

Philip K. Dick didn’t live to see himself turn into a Hollywood industry. While he was alive, the paranoid, brilliant author surely would’ve preferred his odd explorations of the fringes of futuristic societies that existed only in his boundless imagination remain on the pulpy printed page, waiting to be discovered by the distressed or disaffected in the dusty corner of a secondhand bookstore.
Alas, to a producer’s eyes, the science fiction author’s stories just beg, “Put a pensive-looking middle-aged movie star, lots of car chases and a heap of explosions in me and watch me go!”
And that’s just what everyone’s done. When it is good, it is very, very good ― Harrison Ford in “Blade Runner,” Tom Cruise in “Minority Report,” and, most recently, Keanu Reeves in “A Scanner Darkly.” But when it is bad ― Gary Sinese in “Impostor,” Ben Affleck in “Paycheck” ― it’s worse than horrid. It’s just boring.
The successful Dick adaptations all share one thing: brilliant directors (or, in the case of “Scanner Darkly,” animators) capable of taking the frantic, loose framework of Dick’s prose and filling it out to create rich, fantastical and enduringly stylish visual worlds.
“Blade Runner” remains a highlight of neo-noir that influenced cinema, art and even fashion, while “A Scanner Darkly” addressed the issue of drug addiction in an empathetic and humane way rarely seen on screen.
But it’s very easy to see only the surface of Dick’s narratives ― usually a man with a gimmick supernatural power or background running from the authorities ― and make a simple popcorn movie that fails to scratch deeper.
Unfortunately, “Next” joins this latter group, with Nicholas Cage playing a circus psychic who can see two minutes into his own future, but doesn’t want the government to abuse his power even if it’s to find a stolen nuclear weapon set to go off in the middle of Los Angeles.
The one exception to the two-minute rule is Liz (Jessica Biel), a woman Cris continuously dreams or hallucinates (it’s not exactly clear) meeting in a diner. When it finally happens, it turns out Cris can see limitlessly into this woman’s future (If that’s so, why did he have to wait for the diner encounter? Who knows?), and then she gets caught up in the terrorists’ plot.
And, talk about lazy storytelling, these terrorists are about as thinly sketched as it’s possible to be and still show up on the celluloid. They’d be embarrassingly one-dimensional in a Jackie Chan movie. They are not exactly the people you want driving the entire plot.
The FBI team occasionally kicks the movie in the pants, thanks to Julianne Moore, who is wonderfully menacing. However, as the old Korean proverb goes, not even Goryeo’s finest potter can make a fine celadon glaze out of poop. Yes, I made that up, but the point still stands.
And to make matters worse, though it certainly shares many of the formulae familiar from previous Dick cash-ins, “Next” bears absurdly little resemblance to the Dick story it claims to be based on. In fact, rather than building on the themes and layers of its source ― a story called “The Golden Man” published 53 years ago ― it actually hacks off the most challenging parts, one imagines so that we could spend more time watching Nicolas Cage knit his brow at things.
A sort of anti-X-Men, “Golden Man” was about a feral mutant in a dark future who could see the future and seduce women. Cris ― the hero of “Next” ― was the villain of “Golden Man.” There are no terrorists, the federal agent is a man and the ending is meant to leave the impression that natural selection doesn’t always progress toward a more civilized human being.
As we face the practical realities of genetics ― cloning, designer babies, unpredictable engineered hybrids ― such examinations, particularly surprising and provocative ones like “The Golden Man,” will assume new relevance.
“A Scanner Darkly,” a meticulous and artful retelling of one of Dick’s most personal stories, proves that Hollywood hasn’t become completely incapable of issuing science fiction that manages to entertain, connect and stir up the dust of the mind. Yet movies like “Next” will always be around to make a quick buck off humble, decent writers who deserve better.