Inside caves and outdoor splendor

Inside caves and outdoor splendor 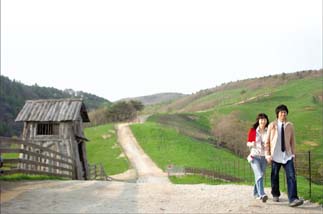 Visitors enter the green meadows of the Daegwallyeong sheep ranch. By Lee Ho-jeong

A cool breeze accompanied by a thunderous roar from a waterfall crashing down a rock face will greet the first visitors entering Daegeum Cave.
The cave, in the Daegwallyeong region of Gangwon, was discovered just seven years ago by the municipal government of Samcheok, but it has been hidden away in Mount Deokhang for the last, oh, 540 million years or so, according to a geological survey. For the last four years the local government has been working to develop the once-hidden treasure into an attraction for visitors, and it is finally ready for prime time viewing.

Children cheer in front of the windmill at the ranch.Cows roam around Samyang Ranch.The monorail to Daegeum Cave. By Lee Ho-jeong

Fifty or so caves have been discovered in the mountainous area, according to the Samcheok government, and they are certain that many others are yet to be uncovered. If you come for the cave, give yourself another day or so and you can also sample the ranches and other scenic attractions here.
The first public area of the cave, just a small portion of the underground labyrinth, will be unveiled to the public on June 5, allowing visitors to see the dangling, brownish stalactites, cave corals and watery depths.
The trip to the cave starts with a ride on a monorail that travels 600 meters uphill from the Daegeum Cave command center at the bottom of the mountain into the mouth of the cave.
The walk from the ticket booth to the monorail offers an entirely unique experience of its own, as visitors pass along a small, beautiful stream within a forest. The view of the mountain below is also breathtaking.
The monorail, which transports 42 passengers in a single trip, enters though an artificial cave entrance. The rail passes into the Galaxy Cave, a tunnel built for the purpose and lit by small light bulbs.
Once a few steps inside the cave, an eight-meter-high waterfall comes into view. It is surrounded by stalactites and cave pearls in a fascinating range of shapes ― a curtain, a beehive and three-meter-long tree branches are all discernable. Some even take the shape of a landscape with water flowing over it. 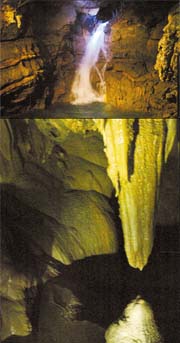 The first waterfall that greets visitors at Daegeum Cave, and one of the many stalactites found within the cave. By Lee Ho-jeong

One of the special features of this cave is the water, which is so plentiful that when it rains the cave floods, making it impossible for anyone to visit, which may account for why it remained hidden for so long. Also inside the cave is a 10-meter deep pool of water whose purity will enchant anyone who looks into its depths.
The entire walk through the cave takes about an hour, and in an effort to preserve the attraction’s natural beauty, the municipal government says it will limit daily visitors to 720.
Reservations can be made at www.samcheok.go.kr. Tickets are 12,000 won for adults, 8,500 won for teenagers and 6,000 won for children. The cave opens at 8 a.m. and closes at 5 p.m.
WARNING: To avoid emergencies caused by sudden calls of nature, visit the rest rooms at the command center before climbing onto the monorail. Once in the cave there is no public toilet and it takes the monorail seven minutes to travel from the entrance of the cave to the center. There is no other way of getting back to the bottom of the mountain except the monorail.
Since the roof of the monorail car is low, be cautious when getting on and off. Also, don’t wear high heels when visiting the cave, as the floors are covered will metal sheets with small holes.
For the most part, photography is prohibited within the cave.
The Daegwallyeong region offers more than just beautiful caves. North of Daegeum Cave and near Hoenggye Interchange on route 50, is Samyang Ranch. It is a nice place for those who like long walks in green fields on a working ranch. Cows graze here and roam freely, adding a soothing, natural atmosphere. There are currently 600 cows being raised on the ranch. 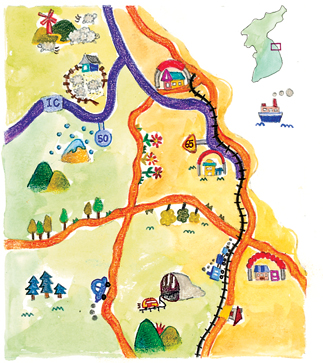 Map of Samcheok and Daegwallyeong area showing the route to Samyang Ranch, the sheep ranch and the Daegeum Cave.

The scenic ranch also prides itself on having been the location for a number of Korean films and television shows. Famous films shot in the area include “Welcome to Dongmakgol,” and “The Brotherhood of War.” There is also a tree that appeared in the romantic movie, “Lover’s Concerto.”
However, there is little evidence of the ranch’s cinematic past, just a a small sign with a movie poster on it to remind visitors it was once a thriving hub of filmmaking activity; no other trace remains.
The ranch also has 53 gigantic windmills that generate 2,000 kilowatts of electricity. According to ranch officials, 95 percent are in operation.
For those who wish to make a quick round-trip around the spread, the ranch provides a tour bus that leaves every eight minutes, regardless of the number of passengers. The entire tour takes 20 minutes.
But you can’t stay here for long. The ranch does not have any hotels, motels or camping areas. No cooking is allowed and there are no restaurants. Private cars cannot enter the ranch.
Tickets are 7,000 won for adults and 3,000 won for children. Admission is free for children under 7 and visitors over 65. Closing time is at 4:30 p.m. and the cows go do whatever cows go do at 4 p.m., which is the last chance to see the herd.
Another attraction is the Daegwallyeong Sheep Ranch, which is also near route 50 between Hoenggye Interchange and Samyang Ranch. The small sheep ranch, with its green hills and grazing sheep, is popular with photographers and also has two wooden structures that were used in the Korean movie, “A Man Who Went to Mars.” The ranch is a perfect place to breathe clear air and restore your sense of calm. There is no admission charge, but feeding the sheep costs 3,000 won.
If calm is not your thing, there is also the exhilarating Mountain Coaster at the nearby Yongpyeong Ski Resort. Here you slide along a rail at speeds you control with a joy stick ― 40 kilometers-an-hour is the top speed.