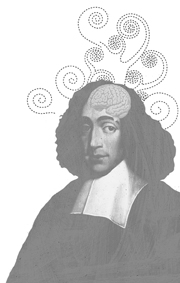 Looking for Spinoza: Joy, Sorrow and the Feeling Brain

“Looking for Spinoza: Joy, Sorrow and the Feeling Brain” is a quest for the essence of the mind. The author, Antonio Damasio, seeks the answer in the 17th century philosopher, Baruch de Spinoza. This Dutch philosopher wrote that mind and body are “parallel” aspects of a single substance in his respected work, “Ethica.”
In doing so, Spinoza drew a clearly opposite line from another philosopher of the same time, Rene Descartes, who claimed a dichotomy between mind and body.
Damasio, the director of the Brain and Creativity Institute at the University of Southern California, attempts to scientifically verify that Spinoza is right. Well, no wonder that his list of past books includes “Descartes’ Error” (2006).
The author first divides the mind into two subcategory properties ― emotion and feeling. Then, he makes an analysis not in the realm of philosophy but in the field of science.
According to Damasio’s theory, a human sentiment starts from emotion then proceeds to feeling. This course, Damasio notes, is very “physical.” Damasio takes an example of a 65-year-old woman who was suffering from Parkinson’s disease. Doctors were looking for new medical treatments for her because her disease defied all the existing remedies and cures.
Finally they implanted an electrode on her brain stem and sent an electric current through it. The patient suddenly started to show sadness. “I don’t want to live any longer. I am a worthless person,” she said, sobbing and choked with tears, “I am afraid of the world.”
Only after the doctors stopped the electric current did she come back to normal. Why did this happen in the first place? The answer is that the electric current found its way to her brain stem nucleus, which governs depression. Once the brain stem nucleus is stimulated, eyes shed tears and facial muscles start to move. At the same time, the lips, pharynx, larynx and the diaphragm also go through the motions of sorrow.
What’s more surprising is that the patient started to feel sad after her body experienced the physical manifestations of sadness. She thought about her disease, which was followed by disappointment and fatigue. The author points out that mind and body are, as Spinoza said several centuries ago, “parallel” aspects within the same substance.
Damasio stresses that feelings are thoroughly about the condition of the body. To verify the claim, he cited the results of a positron emission tomography test for different emotions like sorrow, happiness, fear and resentment.
The test gauged the amount of blood circulation in the brain for the different emotions, and the result showed different numbers for different emotions. Damasio explains that this shows that it is meaningless to draw a clear line separating mind and body.
The author continues to note the importance of the use of emotions. People say, “Don’t be emotional when you make a big decision,” but that’s a misplaced piece of advice from the author’s perspective. The author found that the patients whose emotional system broke down could not make proper decisions. Damasio cites an example of a 20-year-old who turned into a social outcast after suffering brain damage in a car accident in her childhood. Due to the brain damage, she lacked the emotions of guilt, regret and pity, and ended up being a liar and a thief.
The author argued that, no matter how intelligent humans are, there would have been no ethics, religion, law, justice or politics if they lacked emotions. If this is the case, would it be possible for people to control their sense of ethics when they have developed brain science? This book awes readers with wonder about the human brain.
It was recently translated into Korean under the title “Brain of Spinoza.”