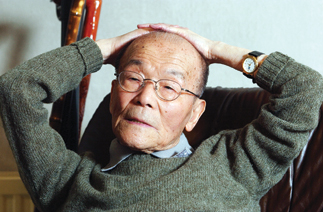 During a funeral mass for the writer Pi Chyun-deuk on Tuesday, the Roman Catholic archbishop of Seoul shared an unusual anecdote that had become a legend among the priests in Korea. Pi, a practicing Catholic, walked into the confession booth one day and told the priest in charge that he had no sins. The story encapsulates the wide-eyed innocence that became a trademark of Pi’s work.
Much of his work celebrated the simple things in life, evoked by devotion to a plain but effective style. So perhaps he knew himself too well.
At the time of his death at age 97, he had published a number of poetry books, some of which had been translated into English. But his real gift and lifetime passion was writing essays, a rare genre for the literary minds of his generation, who were often ambitious producers of historical epics and political satires.
Unlike the times in which he lived, which were fraught with the brutalities of colonial oppression, war, military regimes and dictatorship, Pi’s works were a comfortable reminder of a kind of hope that turned desperation and fear into childlike detachment. His was a lyrical prose, seemingly lacking drama or grand ideas, but instead using everyday descriptions of family, trivial habits or people from his past. He managed to weave pleasant tales beloved by Korean people of all ages, but at the same time not lacking depth.
“Inyeon,” roughly translated as “Soul Mate,” one of the most famous of his works, is a story of meeting and farewell almost as a law of nature. It delves into the author’s affection for a Japanese woman named Asako, whom he meets three times during his life. The story is essentially about longing, but he develops it into a theme about love and our attitudes toward it.
Pi was also a rare intellectual who was not afraid to express his fascination with Western civilization. After majoring in English literature at the University of Shanghai he studied at Harvard. In writing he often noted his respect for Shakespeare, Charles Lamb and Robert Frost.
Reporters who visited his house often noticed a a photograph of the actress Ingrid Bergman posted on a wall in front of Pi’s desk.
But much of his work was drawn from the trivia of everyday life and the people he encountered. “I love every small, beautiful thing that makes up my life,” he once wrote. “I love many people, I hate no one, and I want to love some people most ardently.”
He often wrote that there were only two women in his life, his mother and his daughter, describing her as “his precious gift through his mother’s dear prayers.”
When his physicist daughter moved to the United States to teach at Boston University, he was so overwhelmed with loss and grief that he carried around a blonde doll he had given his daughter as a gift when she was young. He was often photographed in his armchair, carrying the doll, a portrait of melancholy.
On Tuesday, Pi’s family toured the campus of Seoul National University, Pi’s alma mater, which he had wanted to walk through one more time before he died. During the funeral his son read Pi’s poem, “May.”
“May has the freshness of a 21-year-old girl who has just washed her face with cold water. It has the gracefulness of a jade ring worn around a snow-white finger. May is the month of cherries and strawberries, and also the month of peony blossoms. But more than anything else, May is the month of fresh green. Even the needles of fir trees feel as tender as baby skin.”