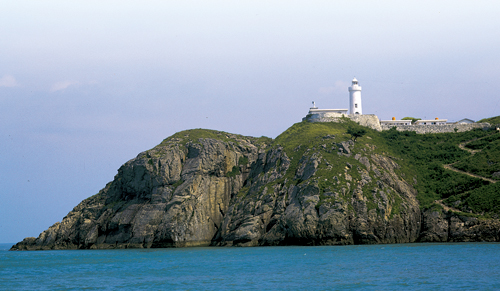 
JODO ISLAND, South Jeolla ― A gentle breeze from the sea blows into a classroom where 21 high school students stare at a stranger from a country thousands of miles away.
“Buenos dias,” says Maria Orffy Bahamon Gutierez.
The 36-year-old woman from Colombia calls on a boy and has him stand in front of her.
As she leans toward the boy and kisses him on the cheek, the students, curiously watching the duo, burst into laughter and the boy’s cheeks turn red.
“This is how people in Colombia greet each other,” says Park So-eun, 20, speaking Korean to the students. “Who wants to try this greeting with the teacher?”
The classroom again is filled with shy giggles.
Gutierez left Seoul at 6 a.m. May 18 and endured seven hours on the road to meet the students on Jodo Island in the South Sea. She is five-months pregnant.
“My husband did not want me to join this trip because I am carrying our baby,” she said while riding to the island on a ferry.
“But I thought this is the perfect time. After birth, I will not have time because I will be too busy.”
It was a big day for the 65 students and 19 teachers of Jodo Middle and High School.
The day was organized by the Korean National Commission for Unesco. It allowed foreigners from Colombia, China and Turkey, along with three Korean interpreters, to visit the school for two days of classes to share the culture of their homelands.
“Living on an island is like living in a house without a window,” said Kim Kong-kyong, a teacher at the school.

“Students on this island have very little chance to meet foreigners in person. We applied for this program hoping it would open doors to the outside world.”
Called the Cross-Cultural Awareness Program, it was launched in 1998 by the commission and has sent foreign volunteers to 2,000 schools across the country in the past nine years.
“At the time, many foreigners started entering the country, but Korean society was not ready to embrace them and their culture,” said Park Hye-kyung, the commission’s program officer.
“We also wanted to give foreigners here a chance to serve the community.”
According to the commission, Korea is the only Unesco member country offering the program.
Currently, 300 foreign volunteers and an equal number of Korean volunteer translators are serving in the program.
“What do you know about Colombia?” asked Gutierez in Spanish, which was translated to the students by Park.
“Gabriel Garcia Marquez,” answered a boy.
“Is there anyone who read his book?” she asked.
Again, the students answered with laughter.
The island has a total population of about 4,000, and the school has one class for each grade, with dozens of students per class. The number of students has been declining by three to four students a year per class, according to the school.
“Residents on the island with more income have been sending children to their relative’s homes in larger cities, such as Mokpo or Busan, to attend schools there,” said Song Tae-hoe, vice principal of the school
“There is no cram school on the island. And most households are barely earning a living by working on small farms.”
At the middle school, 32 students watched a video clip featuring Chinese food
“This is made of a bear’s foot. It costs about 30 million won [$32,000],” said Joanne Xiao Zhang, 24, a Chinese student studying Korean at Seoul National University.
Several students volunteered to wear red and black Chinese traditional dress, called chipao. After they put on the Chinese clothing, their classmates applauded.
“I have always wanted to go to China and now I want to even more,” said Park Seung-hwa, 14, a middle-school student.
“I gave up studying Chinese because it was so difficult, but I want to start learning it again.”
After the 90-minute class, the volunteers boarded a van for a tour around the island, led by a parent.
The Jodo Islands are 20 minutes by ferry from Jindo Island, the latter island is known for Jindogae, a dog indigenous to the island and a natural monument.
The Jodo group consists of 154 islands, of which 119 are uninhabited. The islands were named Jodo, meaning an island of birds, because they look like hundreds of birds sitting on a serene lake when seen from above.
The islands’ peaceful scenery has been featured in TV dramas and films, including Korean director Lim Kwon-taek’s recent movie, “Beyond the Years.”
“Just recently, people from other provinces started visiting the islands. Most tourists to the island are from Seoul or Gyeonggi Province,” said Park Jeong-hwan, 40, a bus driver who also runs a Web site promoting the island (www.jodobus.com).
The volunteers spent the night at students’ houses.

“It was like a party,” said Park You-gyeong, 26, a Korean volunteer.
“Neighbors and student friends came to the house and we played a game together.”
“I thought I would do better on the second day of class because of the warm welcome from the residents,” said Park.
Park So-eun said, “When Maria and I asked them to dance Salsa, the students were very shy, but they were really trying to participate. Students in Seoul or Gyeonggi Province are reluctant to participate ― not because they are shy but because they are not interested.”
Representing Turkey was Volkan Benli, 33, a food trader.
“The students have some light in their eyes,” said Benli.
“For me, it is very important to teach Korean people about Turkey because the two countries are brothers and we have a special bond.”
Park Dal-woong, 17, was one of the most active students at the class.
He was kissed by Gutierez, danced with her and got a present from her for answering a question.
“I learned a lot from the class,” Dal-woong said. “The teacher was very cheerful and vivacious. I think foreigners are a lot more outgoing than Koreans.”
Gutierez was glad she made the trip.
“Not many people know about Colombia,” she said.
“I think by teaching children I do a small thing for my country. When I started speaking Spanish, they were like, ‘wow.’ They have never heard a person speaking Spanish before.”