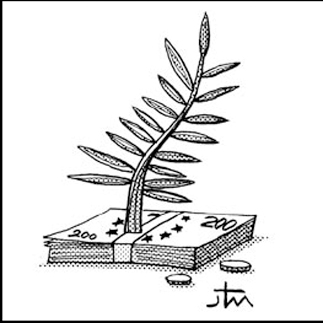 One of the biggest stories this week must be that Jeon Do-yeon won the Best Actress Award at the Cannes Film Festival for the film “Secret Sunshine.” It has been 20 years since a Korean actor won the honors at one of the three major film festivals, when Kang Su-yeon won the Best Actress Award at the Venice Film Festival in 1987. Jeon Do-yeon and the rest of the staff of “Secret Sunshine” received a warm patriotic welcome home.
The film industry places a special meaning on awards, and hopes it will also give a boost to Chungmuro. The company that produced “Secret Sunshine” said box office sales, originally quite low, rose immediately after the announcement of the award. In other words, the Jeon Do-yeon effect.
The Cannes Film Festival is the oldest of the three major film festivals, which includes Venice and Berlin. The three festivals are in artistic centers, and each compete for movies outside the style of Hollywood, where quality movies with diverse topics are not easily found. They rate movies not on terms of sales, but on aesthetics. They are indeed festivals of movie-lovers.
But the idea that a film festival is purely just a place for art is a misunderstanding. It has different faces, too ― politics and money. Above all, a film festival is a sphere of politics of the people behind the screen. Parties take an important place. Movie premieres during the festival show are a time for network-building. Politics and networks built in the international festivals often influence the orientation of the awards.
Another feature of the film festival is money. One of the main reasons that Cannes could become the big brother of the three film festivals is because of the size of its movie market. A large-sized market with a lot of money makes the festival even bigger. For instance, it invites Hollywood stars for non-competition awards outside of the art movie runnings. They bring the media limelight, as well as sponsors from multinational corporations. Stars invited to Cannes also tread the red carpet, in the tradition of the Academy awards. Their splendid dresses and expensive accessories all become part of the public interest.
Moreover, the prices soar across the city during the festival. The festival transforms a once-tired coastal city outshined by Nice into a prosperous cultural center of the world. The Cannes festival therefore is a model of marketing for both the festival and the city’s culture. On the one hand, the festival indulges in the ocean of hunger for artsy films; on the other hand, it keeps a balance between commerce and politics. Therein lie the two faces of a film festival.