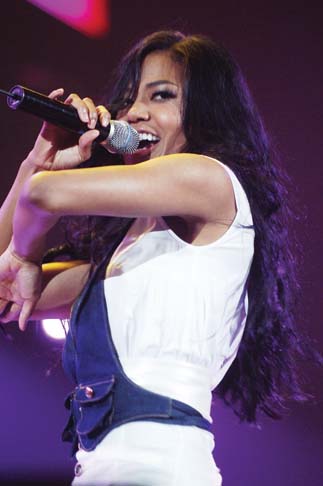 Amerie performs her latest single, “Take Control,” on stage during Mnet’s Countdown. Provided by the organizer

Perhaps the word multitalented could be used to describe Amerie Mi Marie Rogers, the 27-year-old Korean-American rhythm and blues singer, songwriter, and producer. Listening to her layered songs makes you wonder how she emerged with such a brisk, high voice to her R&B singing and dancing. Her latest album, “Because I Love It,” shows a performer moving into high gear.
Amerie’s visit to Korea last month helped reveal her roots. At a press conference a few hours after she landed, Amerie appeared with her 54-year-old Korean mother, Mi-Suk Rogers, wearing an emerald and white traditional hanbok, handmade by the well-known designer Park Sul-nyeo. Because she is half-Korean, her tour here was quite well publicized by the local media, but at the press conference her Korean was limited to saying “thank you” and “hello.”
Discussing her mixed heritage, she said it once caused her something of an identity crisis. “I was offended many times because my friends used to tease me about my mixed race. However, later on I no longer found it to be an issue but I was thankful for the difference. It made me a lot stronger,” she said.
The hardships, however, became building blocks for her career, perhaps giving her a boost. She was selected as the best R&B/Soul or Rap New Artist at the Soul Train Music Awards in 2002, the same year she made her debut recording, “All I Have,” produced by Rich Harrison.
Now she is starting to collaborate with Korean artists, this time working with Se7en (pronounced Seven), the Korean pop idol who sang “Come Back to Me” and “Crazy.”
Her recent third album has attracted attention among Koreans since the main remix single, “Take Control,” features Se7en. “I am a great fan of K-pop; it was an honor to work with Se7en,” said Amerie. “Se7en is very easy-going and free-style; he dances a lot while recording.”
On the evidence of the first single, one might think that this album is similar to her previous recordings, but the difference in her voice is noticeable. Amerie has matured musically in the last two years and her vocals are more complex, with many layers of emotion.
“I put my soul into this third album,” said Amerie. “It not only contains R&B and hiphop styles but also 1980s’ new wave, go-go and soul.”