Sing a song of protest 20 years on

Sing a song of protest 20 years on 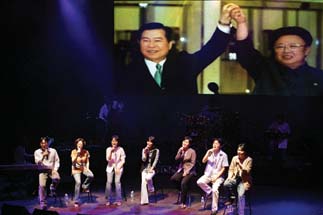 Imagine taking a step back in time to June 1987. If you were born then, think about where you were and what you were doing. How old were you? If you were in your 20s, you should have a good grasp of the pro-democracy movement that took place that summer in South Korea.
That heady summer was brought back for many last month when a performance was held in Daehangno by Nochatsa, an abbreviated form of the group “People Pursuing Songs.” A well-known group of student activist folk singers, Nochatsa were commemorating the 20th anniversary of the movement, and also the 20th anniversary of their debut.
They began with the song “Hello,” a new song by the group’s Shin Jee-ah, which still carries a theme of protest and concern. “You seem to be O.K, but are you really O.K. living as today when so many things are happening?” the lyrics ask.
The seven members include two professional singers, Shin and Moon Jin-oh, but also housewives and businessmen: Cho Sung-tae, Song Suk-hwan, Yoo Yeon-i, Choi Mun-jung and Kim Myung-sik. Of the group that appeared for the two-hour performance, only Song was on stage for the first Nochatsa gig in 1987. Throughout the emotionally charged evening, slides of recent Korean history were flashed on a screen, most recalling the country’s political transformation.
Very much a product of its time, Nochatsa emerged from the opposition to the military regimes that dominated the political landscape from the 1960s through the 1980s.
The form of folk singing the group practices is called minjung gayo, and it has its roots in minyo, a music of protest during the Japanese colonial period. Then, as Western and Japanese music was introduced, minyo went into decline. However, after Korea was liberated from Japanese rule, minjung gayo became a form of music to celebrate freedom. “Min” is translated as “people,” and “jung” as “the masses.”
But in the aftermath of the Korean War, when repressive regimes held sway, the music was outlawed by the National Security Law, but later, after the famous incident in which a worker burned himself to death in protest, minjung gayo entered a new phase.
Its peak was in the late ’80s, as university students formed singing groups along with other activist organizations. With the society filled with calls for change, Nochatsa performed in front of the Seoul City Hall during the June 1987 uprising.
“The police were everywhere and we thought we would be arrested,” said Song. “However, the people responded well.”
Other groups also formed at that time, as students and labor unions strived to find common ground in the fight for democracy.
“In the year 1991, I was on leave from school and we did over 200 performances,” said Cho in an interview with the JoongAng Daily. Despite the hardships, Cho remembers it as a time of hope and promise when the music seemed to matter in people’s lives.
He recalled one evening when the group ended rehearsal and stopped for makgeolli, a type of rice wine, afterwards. “We sang everywhere and that night was no exception,” he said. “One member held a spoon and beat time as we started singing.” Soon, everyone in the restaurant was singing and the music even spread outside to the street.
However, by the mid-90s, the situation was not all that good. An influx of Western music caused songs to begin losing their social identity as pop became the style.
Choi Mi-rang, 21, a member of the student-led music club Ulrimteo at Yonsei University is critical of the modern song culture, but still hopeful about the future of socially responsible music.
“Music clubs that once sang about social issues have changed into other kinds of bands,” said Choi.
“This is a natural phenomena since in the past the purpose was clear: It was about democracy. However, today there are so many issues to be raised.”
Choi says that activism doesn’t have the pull on students of this generation that it exercised 20 years ago. It is no longer “the only existing culture” among students, she says of social awareness. “Students are not as interested in political issues as they were before.”
Choi and the 23 members of Ulrimteo often discuss their identity as they try to carry the torch for a modern-day minjung gayo. One way, she says, is to “concentrate more on the lyrics and the voice.”
It is a tradition that Nochatsa hopes will live on. “If we look into our past carefully, the future can be seen,” said Cho after the performance.
“Imagine thirty years from now, what will you be doing with whom and where? What social messages will exist then?”