A star shines his light into the lives of others

A star shines his light into the lives of others 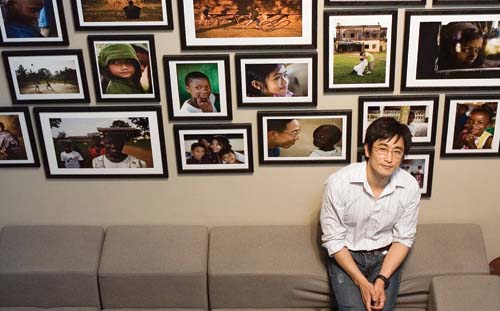 Cha In-pyo, sitting with photographs of children from the third world. Cha, 41, has made a name for himself as an actor with good looks and a good heart. By Shin In-seop

Actor Cha In-pyo, 41, is an ambassador for volunteer organizations such as Good Neighbors, Compassion, and the Holt Children’s Services. These are organizations that help promote the rights of children in developing countries.
The numerous charities that Cha supports show what a busy life he lives, constantly starring in soap operas and movies while also participating in children’s rights events. Yet Cha, in his modesty, is reluctant to accept the public’s growing admiration.
“Just because a person helps lots of people does not mean that he has good qualities but many people tend to think that since ‘Cha is a straightforward man’ he would never make any illegal u-turns,” says Cha. The high expectations that people have of him entails great responsibility, which he sometimes feels is a burden.
This April, Cha visited Ethiopia to meet a child he has been sponsoring. Last year he was in India doing the same thing. This year Cha, and his wife Shin Ae-ra, donated a part of their fees from TV commercials and they did the same last year. The JoongAng Ilbo met with him last month at Compassion House in Sinsa-dong, southern Seoul.
Twenty young members of the Compassion Band had gathered to practice for a performance. The Band was founded in May 2006 to give aid through Compassion Korea.
“Please be quiet during the rehearsals,” says Cha. His comments toward the band members show his force and discipline.
Even though he is the leader of the band, Cha is “tone-deaf.” He said he is ignorant about dancing and singing, but it’s his efforts that really matter. “If I was talented in everything, I could have been quite arrogant,” said Cha. “After all, it’s all by the gift of God.”
Recently, Cha’s continuous charity work has received some criticism. “I don’t mind,” says Cha. “I don’t do these things to satisfy other people but as a way to pursue my own happiness.”
Turning the pages of his passport, he was surprised to see that the recent stamps are all from developing countries such as the Philippines, Mongolia, India and Ethiopia. “A long time ago, the stamps would have been from the U.S., European countries and Australia ― places of leisure. What’s ironic is that I am now more satisfied with life than before.”
Cha says that his fame gives him a responsibility. “Celebrities have more opportunities to do good works but, if I point somewhere, the spotlight should be on what I’m pointing at, and not on my fingers,” says Cha. “People should not make hasty judgments and say, ‘He must have earned a lot of money,’ or ‘He just wants to be in the spotlight!’ If only people would not make such judgments, more celebrities would donate their money and time.”
Cha’s focus is not limited to his charity work but is also on his marriage. In a recent survey by a marriage information agency, Cha was selected as “the star most women would like to marry” should he ever get divorced. Often, his romantic online writings to his wife have been subjects of conversation. However, like any couple they have had conflicts. “It’s most important that couples point in the same direction,” says Cha.
Cha Su-ung, 67, Cha’s father, passed control of his company to an expert, not to one of his three sons. The fact that Cha the celebrity did not enter a new phase of being a CEO has left people with a positive impression. “It’s natural that none us should receive the right to take over, since we all have our own careers,” said Cha.
Among celebrities, a dazzling marriage often leads to divorce and bad behavior, but Cha is seen as a sprinkle of rain amid drought. Because of this status, he is often asked to support political movements and his answer is always “No.” He says that he is interested in politics, but only as a member of the nation, not as a politician. “Past decades have shown us that politicians can not reunify our two countries.” Cha’s vision is to bring about reunification through non-governmental organizations.