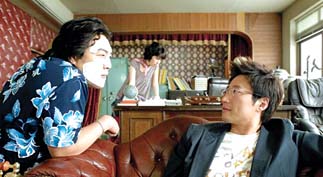 “War of Money,” a TV drama with an honest view of money. [SBS-TV]

It’s been two years since I moved into my own place and I have slowly learned to stay away from the seduction of two-for-the-price of-one broccoli in the supermarket. It’s still hard to resist a surprise sale, but it’s better to buy just one broccoli than have to watch the free one decomposing in the refrigerator.
However, my big Friday ritual is still to scrutinize the cut-price fliers from the big supermarkets. Sometimes I feel penny wise and pound foolish when I find myself hailing a taxi for a 3,000-won ($3) ride with my hands full of products that came with the same amount in discounts. If I succeed in resisting the taxi, I have to fight to keep my balance on a speeding bus with both hands full of plastic bags.
It is an addictive kind of fun to hunt for the best price while dreaming of being a millionaire in 10 years time. Dreaming of “being” a millionaire rather than “marrying” one (although it wouldn’t hurt to do both) seems to be an honest way to remain frugal, until my Lotto ticket hits the jackpot.
I am not the only one who has a love affair with money, as proved by the large audience now watching the new TV series “War of Money” on SBS-TV. After debuting in late May, the show, airing Wednesday and Thursday night at 10, has achieved an audience rating of 30 percent and is outranking its competitors. One mission statement of the series is “Watch this drama, and you’ll be rich.” How tempting for plebeian TV viewer like me.
However, the mission statement is a bit of an exaggeration. The show is tale of a stock analyst, Geum Na-ra, who decides to become a loan shark when his father commits suicide after he was threatened by loan sharks. Geum (whose name is a Korean pun for “land of gold and money”) once had everything, but his life collapses after his father’s demise and his mother’s subsequent death from shock. Geum finds himself homeless and hungry. He then decides to take revenge by making so much money that he has cash to burn. Turning into a cold-blooded fellow, he tracks down a legendary loan shark and begs to be his pupil, learning the skills he needs for revenge along the way. Park Shin-yang, who plays Geum, is the jewel of the drama.
Meanwhile, the other axis of the story is Seo Ju-hee, a bank clerk whose father also suffers at the hands of loan sharks. Remaining faithful to her motto “Men leave scars, but money leaves interest,” she decides to marry for money, but Geum suddenly appears and blocks the marriage. And, true to TV cliche, love is soon in the air. Not surprisingly, there are other factors that complicate the couple’s relationship.
Based on a Korean comic, the drama can seem trite, and it does not make sense that the heartless Geum so easily softens for Seo. Yet, as the show’s ratings prove, the series has the power to draw an audience ― and it appears to be the power of money.
The drama actually offers an honest look at the true meaning of money, instead of romanticizing the subject, and the public is responding with enthusiasm. As a bonus, it also offers a number of good sayings regarding money such as “Money, not the pen, is mightier than sword.”
It is somehow sad to imagine 30 percent of the TV sets around the country tuned into this drama while all the viewers burn with a desire to get rich. After all, the world is an unfair place, and money is the heart of the problem. Currently, one of the most popular TV commercials is from a private loan business that lures viewers with the offer of “no interest for two weeks.” It’s scary to think what happens after the grace period expires, yet that’s the reality of the private loan business, which is apparently booming in this world where money rules.
In the meantime, I will continue my hunt for affordable groceries, while listening to ABBA’s “Money, Money, Money” and watching “War of Money.”