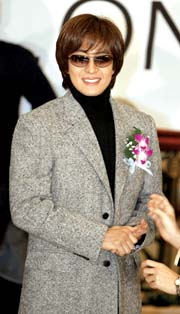 Bae Yong-joon, the sweetheart of the Korean Wave, is coming back as the king of an ancient kingdom, following a four-year break.
This is Bae’s first TV drama since the “Winter Sonata,” which was a mega hit in Japan in 2002. The show turned Bae into a living legend, especially in Japan.
Bae’s new TV drama, “Taewang Sashingi” (or “Legend”) was written by Song Ji-na and directed by Kim Jong-hak. Song and Kim have previously produced hits like “Morae Sigye” (Hourglass). Bae plays Damdeok, the great king of the Goguryeo dynasty. The cast includes other big names such as Moon So-ri and macho actor Choi Min-soo.
According to Kim Jong-hak Production, the company behind “Legend,” a total of 24 episodes have been shot over the last two years, in advance of first airing, which is a rarity in Korea. Many Korean TV dramas are still in the course of shooting when they first air. Forty-two billion won ($45.3 million) has been invested in the drama, a record for Korean TV. “Legend” will debut on the 25th of this month on MBC, and will be aired on NHK in Japan as well.