Men find a new role at the kitchen sink

Men find a new role at the kitchen sink 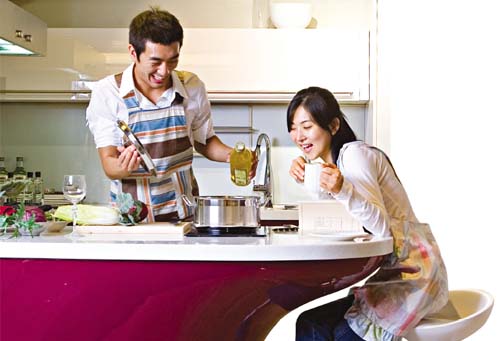 Lee Moon-gyu, 39, has been married for 10 years. He said he was recently on a business trip with two other men in their mid to late 30s. “We were having a long conversation and we began talking about household chores,” Lee said. “We were talking about folding shirts and how to cook.”
Shin Mi-hye, a 36-year-old office worker who has been married for nine years, said her co-workers have nicknamed her spouse the “husband from heaven.”
“My husband not only cleans the house, cooks and takes out the garbage; he also waits by the bathroom door with a towel when I wash my hair,” Shin said.
Unlike traditional Korean husbands, who leave every household chore to their wives, including the raising of their children, some modern husbands in their 20s and 30s are equal partners in housework.
In the past, when the men of the house were solely responsible for putting food on the table, it was believed that women had to do all the work in the home. It was not unusual to see a husband lying around the living room during the weekend while his wife continued to run the washing machine, clean the house and nagged him to take the children outside for some fresh air. Today, young husbands are changing. Not only do they clean the house, wash dishes, help raise children and cook, they also go shopping and pay the bills, which was previously a woman’s job.
“There is a polarization between the generations, even with chores,” said Park Soo-mee, a researcher at the Korean Women’s Development Institute.
“The younger the married couple, the more likely they are to feel responsible for sharing household chores and bringing home the bread and butter together,” said Shin Yeon-hee, a professor of social welfare at Sungkyul University. “However, in many cases, men have trouble following through on what they think they should be doing.”
Kim Seong-deok, 43, said although he truly believes that he and his wife should share the burden at home, it is difficult for him to put his beliefs into practice. “I feel I do my share at home but in reality it isn’t true,” Kim said.
Kim is not the only person trapped in a contradiction over sharing house chores.
In a survey of 5,161 people by the JoongAng Ilbo and G Market, an online shopping mall, 74 percent said household chores are the joint responsibility of men and women.
However, in reality, only 52 percent of men helped out around the house and most of what they did was small chores. According to the poll, 43 percent helped with only 10 to 20 percent of work around the house, while 23 percent were involved with 40 percent of the work. Helping out with raising the children was the household chore most frequently performed by men. In the survey, 65 percent said the husband at least played with the children and helped out with homework more than once a week. However, husbands who helped with washing clothes or cooking for the family accounted for less than half.
The survey also showed that men whose wives have jobs are more likely to help around the house. Among such husbands, 64 percent did their share of household chores. The younger the husband, the more work he does at home. In the survey, 54 percent of married men in their 20s said they helped around the house. By comparison, only 38 percent among men in their 60s did so. The work sharing mentality also turned out to be different according to age. The study shows that 74 percent of men in their 20s thought household chores were a joint responsibility. Only 67 percent of men in their 50s thought the same way and only 58 percent of men in their 60s believed so. There were also differences depending on the region where a married couple lives. Men living in big cities such as Seoul and Daejeon participated in household chores more often than men living in the Gyeongsang provinces, a region known for its conservative family values. In Seoul, 55 percent of those polled said household chores are the responsibility of both husbands and wives. In Daejeon 61 percent said the same. In contrast, in South Gyeongsang, only 46 percent believed that both men and women should do household chores; 49 percent believed so in North Gyeongsang Province. The men in Jeju were most liberal, with 63 percent believing that men and women are both responsible for taking care of a house.
Kim Seong-gon is a 30-year-old KTX train crew member with a wife who also works. The couple have a six-year-old daughter. Kim says that since he stays at home more than his wife he frequently fed his daughter and changed her diapers when she was a baby. 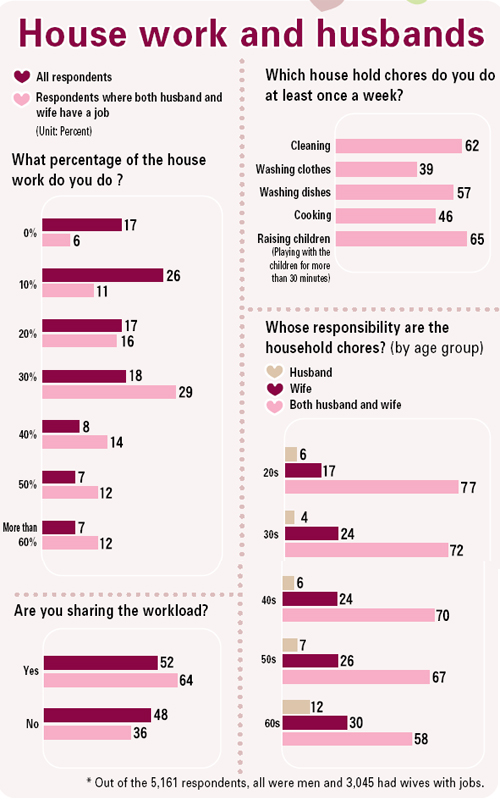 “Since my wife works, it is reasonable that we share our chores. To be honest, household chores aren’t really work,” Kim said. The services that such husbands provide are also different from the conventional role that men played in the house. Lee Seong-ho, 29, gives his wife a foot massage once or twice a week. “I soak my wife’s feet for 20 minutes in warm water and gently rub on an aromatic product. It’s good since we can make conversation while watching television,” Lee said. Kim Dae-hwan, 31, massages his wife by rubbing her legs with a beer bottle. “I get enjoyment from making small talk with my wife while giving her a massage.”
So how do the parents of such helpful and and gentle husbands react to their sons’ behavior? “My parents think the man of the house should do more chores,” said Kim Dae-hwan.
“Sometimes, when I think of my son cooking rice and washing dishes, it seems pretty pathetic,” said Park Jong-gyu,71. “But mostly I think it’s better that his wife works so that he doesn’t have to make money for the family all by himself. I think it is wise that he helps out around the house so she can do her own job properly.”