Joining in the game

Joining in the game 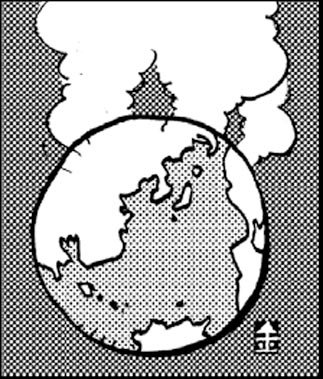 Is global warming a blessing to humankind? Some 100 years ago when fossil fuel was not as massively consumed as it is these days, eminent scientists in Europe believed it was. In 1890, Svante Arrhenius, a chemist who won the Nobel Prize in 1903 for his study on ions, found that an increase in carbon dioxide in the atmosphere caused greenhouse effects. But he did not realize the seriousness of the issue. In his book “World in the Making,” he described a pastoral view of the future. He wrote that the greenhouse effects caused by the increase in carbon dioxide will make cold regions warmer and increase the volume of harvest around the world, which will be a greatly help in sustaining the world’s surging population.
Now everybody knows that greenhouse gas is harmful. The United Nations Intergovernmental Panel on Climate Change recently made a conclusion on this issue. The panel decided that excessive emissions of carbon dioxide is the culprit ruining the Earth and that the increase in carbon dioxide must be curbed within eight years for humankind to survive.
The general idea is clear, but particular issues are complex. The warming is more serious in middle and high altitudes. Because of the word “warming,” many imagine heat waves and droughts, but global warming will cause a variety of disasters from floods to tsunamis to hurricanes. There will be a huge difference between rich countries and poor ones in their ability to respond to such possible events.
As Antarctic glaciers melt, raising the sea level, Tuvalu, a Polynesian island-nation in the South Pacific, is in danger of sinking into the ocean. Some 90 percent of Mongolia could become desert. Many countries exposed to dangers caused by global warming have no defense. But advanced countries protect themselves with financial power and high technology, such as a carbon exchange and green technology.
In the G8 summit meeting that is to be held for three days beginning today in Germany, the most important issue is global warming. The United States has been criticized for having withdrawn from the Kyoto Protocol and now it suggests that 15 other countries, including China and Korea, participate in the debate on greenhouse gas, at the G8 meeting. The United States seems to be expanding its frontier against the European Union.
As Korea is the world’s 10th country in terms of carbon emissions, Koreans can no longer be a passive spectator in a game in which the United States, the European Union and China are fiercely fighting.