Land of mystery and surveillance

Land of mystery and surveillance 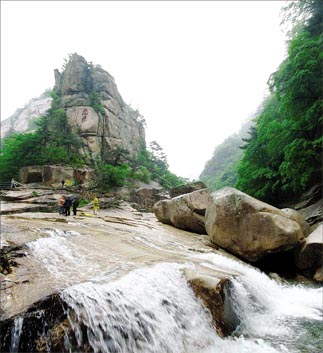 Naekumgang’s Manpokdong valley is known for its beautiful emerald green streams and waterfalls.

rekking through deep woods, massive rocks inscribed with communist propaganda, a beautiful green-colored stream and a lot of North Koreans with cheap gold rimmed sunglasses. These were my first impressions of Naekeumgang, which this month, for the first time since the Korean peninsula was split in two over fifty years ago, and nine years after the first South Korean tourists set foot on North Korean soil, admitted visitors from South Korea.
Until last month the Mount Kumgang tour only accessed a section known as Oekumgang, where rocks take the shape of various life forms including horses, tortoises and so forth. North Korean guides say the true beauty of Mount Kumgang lies within Naegeumgang (inner Kumgang).
While Oekumgang is considered to have rough, macho features Naekumgang is considered to possess a more subtle and feminine beauty.
In fact on my arrival, Naekumgang, with a misty fog descending upon it, seemed like a seductive enchantress who also has the quality of a shy maiden inadvertently exposing her shapely shoulders through a thin silk dress.
The tour began with a visit to Pyohunsa, a Buddhist temple sitting at the bottom of Naekumgang. It takes nearly two hours by bus to arrive at Pyohunsa from Onjunggak, a sprawling tourist complex located next to the Oekumgang Hotel.
The view from the temple and the setting behind it is exquisite. Among the four famous temples in Mount Kumgang, Pyohunsa is the only one that remains standing as it was when originally built.
The rest ― Changan, Yujom and Singye temples ― were, according to North Korean guides, destroyed as a result of bombing by the U.S. air force during the Korean War. Visitors can see the site where Changan temple once stood, as it not far from Pyohunsa, which was built in 670 A.D., during the Silla Dynasty. Pyohunsa has two Buddhist monks.
The trip into Naegeumgang really starts 100 meters from the temple, when visitors pass through a passageway marked by two gigantic rocks. It is called Kumgangmun Gate. 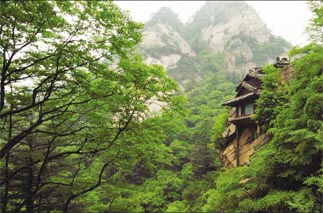 Podukam temple, perched on a cliff, is one of Naekumgang’s most strikingly beautiful sights.

From there on magnificent rocks and sparkling streams hove into view and small, dramatic waterfalls take one’s breath away.
An emerald green pool of water tempts one to jump in and soak in its beauty. This area is called Manpokdong Valley and it is about 1 kilometer from the Kumgangmun Gate.
The biggest heart-stopper at Naekumgang is Podukam, a Buddhist temple that sits at the top of a 20-meter-high cliff. In the past, the only thing that kept the temple glued to the cliff was a 7.3 meter long pillar that supports its foundations, but now several steel chains hold the wooden temple fixed in place. The temple was built in 627 A.D., during the Goguryeo Dynasty. It was destroyed and then rebuilt during the late 17th century. The edifice itself is small and unprepossessing. It’s a compact structure with the paint wearing off and it sits humbly among green trees. It is only 3.35 meters wide at the front and 5.3 meter long on the side. Currently no one is allowed inside the temple because it is unstable.
According to our North Korean tour guide, who was a bit distracting because she wore too much white makeup, there is a legend connected to the temple. It starts with a young Buddhist monk called Hoejeong, who neglects his strict training one afternoon to take a nap. In his dream he falls head-over-heels in love with a woman, who gives no response to his amorous pleas. After he wakes, he comes upon her by chance at a stream in Naekumgang where she was washing her hair. He tries to follow her but she disappears, although that very night she reappears in his dream and tells him that her name is Poduk. She tells him that she is disappointed by his behavior, which she says is inappropriate for a practicing Buddhist. She then says that if he completes a poem she had started in the right way, she will do his bidding. Poduk start the poem by saying “If I were to serve you.” Haejeong answered, “You would have all the fortune and fame in the world.” With a sad face, Poduk told the young man that he had given the wrong answer. As a monk he should have said, “All my years of training would have gone to waste.” When the monk woke up he realized what he had done. Then, finding a blue bird he believed to be a transformation of Poduk, he followed it as it flew up a cliff. When he arrived at the top he found a small cave where there was a small Buddhist statue and stacks of Buddhist scripts. He realized that Poduk was a messenger sent by Buddha and he finished his studies in the cave, which became the site of the Podukam temple. 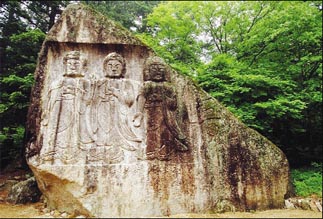 The front face of Sambullam, where three figures of Buddha greet visitors. By Lee Ho-jeong

The entire guided visit to the inner segment takes about an hour. Below the mountains there are other things to see. One is the Sambullam, a stone monument which is eight meters high and nine meters wide. On the front face of the triangular stone wall there are three Buddha sculptures. On the back there are 60 or so weather-beaten sculptures of miniature Buddhas.
There is also a legend that two Buddhist monks had a competition to see who would make the better Buddha sculpture. The person who won will be the new head of a temple. The person who made the sculpture on the front of Sambullam won because his work had elegance, beauty and serenity. The other, full of ambition, believed that quantity was better than quality and he made the much rougher sculptures in the rear. Realizing his mistake, he committed suicide. His three sons followed their father into death and North Koreans say the father and his sons turned into rocks that can be seen in a stream not far from the site of Changan temple.
For those who love shopping, the Korea Tourism Corporation has opened a duty-free shop within the Onjunggak area. It offers prices that are 30 to 40 percent lower than in Seoul and it has a range of products including Bvlgari perfume and Addidas footwear.
For food, cold noodles from the Okryugwan restaurant are recommended. The noodles, which cost $12, provide a taste that is hard to forget.
The main drawback to the trip are the heavy restrictions, which can become irritating. The Big Brother surveillance starts the moment one enters North Korea by passing through the demilitarized zone. In North Korea photography is limited to permitted areas. Taking pictures of North Koreans or North Korean villages while riding the tour bus risks the destruction of one’s film or the possible erasure of the camera’s memory card.
Every movement of visitors is watched from a distance by North Korean soldiers. Forbidden activities, such as smoking in non-smoking zones, are signaled by the raising of a red flag.
The tour lasts for three days and begins at 3:20 in the afternoon. The bus for Naekumgang, North Korea leaves on Monday, Wednesday and Friday every week.
On arrival travelers are offered a show at Onjunggak with North Korean gymnastics including some unusual North Korean clowns.
The trip to Naekumgang starts on the second day and runs from 8 a.m. until 6 p.m. On their return the visitors get a chance to relax in a hot spring.
On the third day visitors are given three choices. They can go to Oekumgang’s Manmulsang, Guryong waterfall or the Samilpo-Haekumgang course. Of course the guides suggest visiting Manmulsang on a clear day as it would be a disappointing and exhausting trip if heavy fog sets in. After lunch and some time to shop, the bus returns to Seoul at 2 p.m. 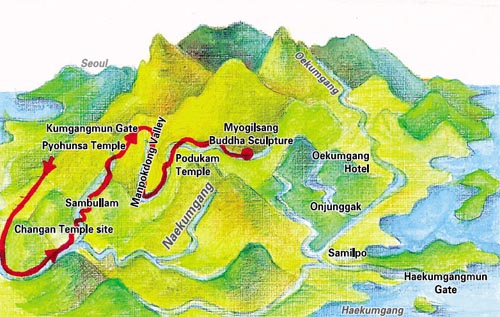 
The cost varies with the type of accommodation selected. Until September there is a special discount period to celebrate the opening of Naekumgang and the total cost is 420,000 won ($460) per person for those staying in hotels. The hotel price rises to 520,000 won during the peak season ― normally June through August. For those staying at pensions, the three-day trip costs 370,000 won. In peak season the pension price is 470,000 won. For those staying in the village, the three-day trip is 280,000 won at off-peak times and 350,000 won during peak season.
Reservations can be made by calling 02-3668-3000 or at www.mtkumgang.com. Reservations must be made 10 days prior to the trip. The Website, however, is in Korean.