A poor choice of words

A poor choice of words 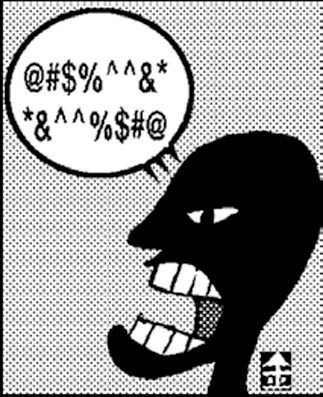 When a person from Gyeongsang Province meets a very old and close friend, he calls him names - a leper. In pansori, Korean story-singing, vulgar words make for better, more humorous satire. In his book, professor Shin Young-bok said that in swearing bold realism can be found, as opposed to the abstract words of intellectuals. But swearing is the product of the shadow and the language of misfortune. The person who swears may feel good by letting out stress, but to the other party swears are a sort of violence which can be very offensive if there is no common cultural background, deep trust and affection.
In an unabridged dictionary on the standard Korean language, a swear means an offensive and insulting word that hurts another person’s dignity, or a curse word. In 1973, the comedian George Carlin’s monologue created controversy in the United States. It was about seven different obscenities, and a man who heard it with his son got upset and sued him. The Supreme Court set a new precedent that although the first amendment guarantees that freedom of speech, swears are allowed only when children are not listening.
Are swear words still swears when they are used only to emphasize something? In the 2003 Golden Globe awards ceremony, a person said “really f**king brilliant” and that was aired live. After a long controversy, the court of appeals ruled that a simple expression like this that shows excitement or frustration is hardly seen as an obscenity. The Supreme Court’s ruling is still in place, but it is hard to accept. The court’s ruling read that the president used the same word so it is unfair to punish only the broadcasting company.
Last year, U.S. President George W. Bush used the expression “damn long” when talking with his counterpart from a foreign country. He once called a journalist of the New York Times who criticized him an “asshole.” When entertainers swear they are criticized and that is it. But when the president uses such expressions, those words become normal words. Thus, it is a duty for leaders to maintain dignity. That is, not to put on airs.
The other day, President Roh Moo-hyun crushed the presidential hopefuls of the opposition party. He said he did not have the skill of polishing his words in front of a camera. Three years have passed since Nam Sang-kook killed himself by jumping off a bridge into the Han River after President Roh made sarcastic remarks about him. President Roh still says he will be better if he is given a second chance. Can we trust him? The grownups are not the right people to scold youngsters who write spiteful replies on the Internet.