Shadows of emotion, hidden deep inside

Shadows of emotion, hidden deep inside 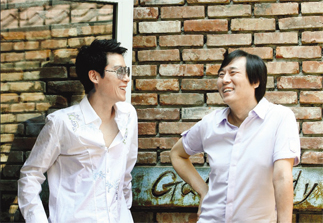 The pop singer Lee Hyun-woo, left, and the jazz pianist Kim Gwang-min have long shared a friendship, and they are soon to release a joint album. By Choi Seung-sik

The pop singer Lee Hyun-woo and the jazz pianist Kim Gwang-min have many things in common. They are both single, known for their love of alcoholic drinks, their disdain for marriage and their passion for music. The two are fondly remembered as the hosts of the MBC-TV show “Wednesday Art Stage.”
The show ended three years ago after eight years, yet it has not faded from people’s memories because of its strong live performances and the entertaining presence of the two M.C.s. Even after the show ended, the two men remained good friends and supportive critics of each other’s music.
In a recent interview, Kim, 47 and Lee, 41, showed off their friendship for the JoongAng Ilbo. Lee started by talking about Kim’s latest album, “Sigan Yeohaeng” (Time Travel).
“Listening to your new release, I thought your music is changing,” Lee said, “You used simple rhythms and melodies, which is a change from your past style.”
“That’s right,” Kim responded. “I learned to express my music with fewer notes. There is beauty in emptiness.”
“I agree,” Lee said. “I used to fill my songs with as many notes as possible, but I’ve changed.” Kim then addressed Lee’s latest release, “Heart Blossom.”
“Listening to your album, I thought that you have learned to sing with a more comfortable state of mind, and that’s a good thing.”
The two musicians are interested in each other’s work because they are planning to create an album together, which is set to hit the market this fall.
“I think that your jazz piano will enhance the quality of my voice,” Lee said. “But why don’t we make a new and aggressive style of music for this album? Maybe it’s time for you to break out of the shell of your mellow jazz music.”
“You know, I enjoy listening to rock music these days,” Kim said. “I think we should consider a number of possibilities.”
Lee is known as a versatile character. He has pursued careers as an actor, radio D.J. and businessman. Now he is about to add a new career as a musical actor by starring in the new musical “Singles,” which debuts this Saturday at the Dongsung Art Center, where it will run for two months. Kim said, “Aren’t you too busy? Take care of yourself.”
Lee responded with a grim look: “For some time I’ve thought that I must continue to have new challenges, or I will get old. I am practicing hard every day for the musical, and I am sure it will be good for me and my career.”
Kim is also busy preparing for a solo concert on June 27 at the LG Art Center. “My goal is to get rid of the image that my music is sad, but I don’t know if I will be successful,” he said.
Lee then began to talk about how he is changing in pursuit of his music. “I used to make gloomy and rough music, but I also look for new approaches,” he said. He added that he came to adopt the habit of change through his new hobby ― climbing mountains.
“Looking down on the world from a peak makes me realize how small I am, and I get liberated from greed and jealousy; all I can see is the brighter side of life,” he said.
One thing that the two men have not changed is their views on marriage.
“I recently broke up with a girlfriend,” Lee said and I am now in a phase of my life when I need some time for myself.” He added that his father badgers him to get married. “But I don’t want to get married just because time is passing.” Kim echoed the sentiment. “I do not like the marriage system of our society, and I will keep to my position regardless of the system.”
By the time the interview was over, the two musicians had finished a bottle of wine and their Sunday brunch. Wrapping up the interview, Lee asked Kim, “I heard that musical actors all cry during their last performance. Do you think I will cry, too?”
“I am sure that you will,” said Kim. “You and I both have the shadows of emotions hidden inside.”