[Talk of the town]Curvaceous scribe

[Talk of the town]Curvaceous scribe 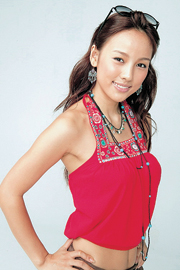 Lee Hyo-ri, a pop diva known for her curvaceous body, declared last week that the new focus of her life will be books. Lee, who is the definition of sexy in Korea, spent eight years to earn a bachelor’s degree from the four-year undergraduate program at Kookmin University. Now she has entered the Graduate School of Journalism and Communication at Kyung Hee University.
She will be majoring in media studies and social science. Lee will join other celebrities at the graduate school, including actor Jeong Joon-ho and singer Kim Tae-woo of the disbanded boy group g.o.d.
Lee said in recent media interviews that she has no plans to star in any TV dramas for a while and wants to focus on her master’s degree. She starts her first semester at the graduate school in September. She added that she would have some time to herself at the graduate school. Lee has had very little private time for herself ever since she made her debut as a member of the idol band Fin.K.L in 1998. She then went on to pursue a solo career.
However, Lee is still making headlines in tabloid newspapers following her latest photo shoot, in which she wore a revealing bathing suit, for a fashion magazine.