An apostle of the noble grape

An apostle of the noble grape

When things are going well, at what point should one take a leap of faith and try to make changes, in the hope of reaching greater heights? In the case of Korea and viticulture, the time is now, according to Park Won-mok.
“The problem with Korea’s wine industry goes beyond distribution or battling with imports. It now is about actively making wine,” said Park, a former professor at Korea University’s life sciences department. He has been researching the art of wine-making and educating local farmers about wine technology since the late 1980s.
Sitting on a cozy-looking couch at his rustic Icheon home in Gyeonggi he looks out over a small vineyard. The 65-year-old academic, who prefers the title of farmer ― “let’s say I’m a fancy farmer” ― has been teaching wine courses since 2005, ever since he urged his university to include the class as an elective. Earlier this year his book “Wine Lecture” was published by Kimyoungsa. In writing the book he decided to avoid a humanities approach covering issues like the history of wine and instead he concentrated on the scientific and technological aspects of wine. “I wanted the book to help farmers and others involved in the wine business,” he said.
Coming from an agricultural studies background, Park has always been intrigued by the production of alcoholic beverages, especially the fermenting process, which can make the difference between a special wine and something close to vinegar. Before he began to focus on wine-making, he made beer.
“After a while, I decided that wine was a more relevant beverage to experiment with than beer at that time,” he said, referring to a period around 1988. “Beer was already doing well in Korea, with not much room for further study since large conglomerates were already engaged. However, not many people knew how to, or were interested in, making wine,” he said as he explained the course of the drinking culture in Korea ― from makgeolli (Korean rice wine) right after the Korean War, to soju, beer and now grape-based wine. 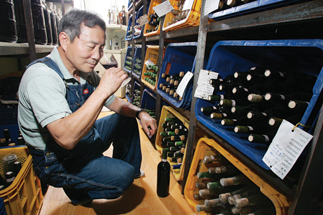 Park tastes wine at his cellar in Icheon. By Kang Uk-hyun

With recent free trade agreements, importing wine into Korea is expected to be much easier, especially with countries like the United States, Chile, South Africa and Australia. Park thinks the risk is that Korea’s wine industry might lose its identity and be overwhelmed by a flood of cheap foreign products.
“It’s a shame because as people get more interested in wine, the only sectors that seem to be benefiting are foreign companies and importers. Without Korean farmers and companies getting involved in the production of wine, the wine industry is going to remain under foreign domination,” said Park. He said that most Koreans who have an interest in wine are mostly consumed with tasting and evaluating premium products from overseas, “which is not going to be much help to the agricultural development of this country.”
Park gave me a tour of his small vineyard, which has about eight different grape varieties, including Western favorites like cabernet sauvignon and sauvignon blanc and Asian specialties like Cambell’s Early and bokbunja (Korean wild raspberries). He said that when he asks his students why Korea does not have a more active wine industry they often cite problems with climate, soil and grapes.
“This is not the case,” Park emphasized. “Of course, in the 1970s, when Korea’s winters were extremely cold, growing grapes was very difficult. Nowadays however, the temperature is quite suitable for growing grapes.”
The grape variety that, according to Park, is the most appropriate, not to mention abundant, for making wine in Korea is Cambell’s Early, a variety that many people regard as a table, not a wine, grape. “This is not true,” he said as he picked up a thick book in English called “Wine” and read out a section in which Cambell’s Early is defined as a good wine grape. “The Japanese have been making excellent wine with this grape. Also, because this variety is very resilient, it is rarely ruined by the weather or soil problems, which is an extra bit of good news for farmers.”
He has been experimenting with other Asian grapes like Kyoho and meoru (Korean wild grapes). Comparing the three, he said Cambell’s Early has the strongest scent. “When you go into a Korean supermarket, you notice the Cambell’s Early stand because of its overpowering scent,” he said. “Asians tend to like this smell, but Westerners do not, because it is too fruity. I’m trying to develop a way to tone down the scent.”
“Kyoho grapes have a high intensity, but the aroma is not strong,” he said. Park is in the process of making hybrid wines using all these grape varieties so that each one compensates for the other’s weaknesses. “I think Kyoho grapes will make a wonderful rose wine if I can only solve the problem of the bouquet.”
Park also criticized Majuang, made by the Doosan Corporation, the largest wine manufacturer in Korea, for being “cunning.”
“When you look at the bottle, the label is spelled out in Korean but if you look on the back, where it states the producer, it will say the United States, Australia, etc.,” he said. “It poses as a Korean label but it’s really not. On top of that, although the price [between 8,000 to 12,000 won] is affordable, the wine is made from grapes of very low quality. For the same price, one can find a better wine that is manufactured in other countries.”

Along with misconceptions about Korea’s ability or lack of resources to make wine, Park said that another problem is government regulations. Unlike European countries that excel in wine production, such as Italy or France, individuals are not allowed to sell wine in Korea. Park says this is a major stumbling block for the farmers.
“In Italy, many small growers develop their own wine and sell specialist vintages of around 1,000 to 2,000 bottles,” he said. “That is how their wine culture has prospered. In Korea, however, the grower and wine maker are two different things.” 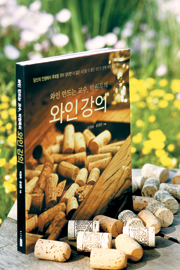 He explained the consequences that go along with this situation. “Wine factories want to buy grapes at the cheapest possible cost, which will make for a poor quality wine. Farmers send all their best grapes to Seoul, to be eaten as fruit.”
He added, “It [wine-making] should really be perceived by the government as like making kimchi ― something very natural and not at all high brow. The current regulations are not benefiting anybody.”
Another problem is that Korean farmers do not have the technology to make good wine.
According to Park, they are not interested in making wine, because Korean consumers are reluctant to buy local wine. “It’s not their fault really. Korean wine, unfortunately up to this point, has not been good. Even better known names like Chateau Mani are not up to standard yet. Compared to wines from other countries, it is too sweet and doesn’t possess deep layers of aroma and taste. It’s a vicious circle,” he said.
So, with a reasonable belief in the positive outcome of change, or perhaps with stubborn optimism, Park plans to devote the rest of his life to this issue. He has been giving grape farmers in rural areas lectures on wine production. Park, who retired from Korea University earlier this year, said he “is quite old now” and even with the university’s invitation to teach more, he is quite content in his small vineyard.
This is quite an ironic twist for someone who says his limit is one glass of wine, but, as he said, the issue goes beyond the surface. Tasting and enjoying wine have spiritual elements that are as old as man. From now on Park plans to spend his time developing different kinds of wine using Korean grapes and giving opportunities to Korean farmers to make a profit out of wine. “I don’t get paid for the lectures I give to these farmers. I feel like I am one of them though. My dream as a high school kid was to become a farmer. I’m finally pursuing this path. I hope I can make the wine industry more efficient for myself and other farmers out there.”