Chinese artists find their own images

Chinese artists find their own images 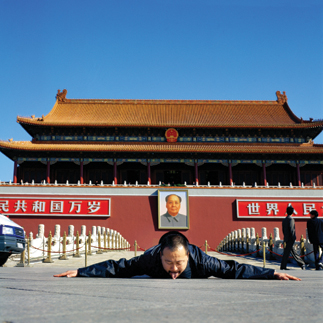 It’s no secret that Chinese contemporary art works sell like hotcakes on the world art market. But their value had been graded largely on commercial grounds, with pieces seen as commodities to be traded.
To many collectors China is a constant source of exotic inspiration, with its artists feeding off naive fantasies about modern ideas. However, the diversity of art blossoming in the vast country vividly express how artists feel about modern-day China.
“China: Contemporary Photo and Video” is an annual event for the Gana Art Gallery.
The exhibit draws attention to emerging photographers and video artists, based in Beijing and Shanghai, who produce works with a strong political perspective on China’s “new” capitalism.
One of the exhibition’s most interesting participants is Cang Xin, a performance artist who started out with “The East Village Artists of 1994,” a radical collective.
The artist spread his name through a series in which he licked the surface of the ground at various sites of historical importance, such as Tiananmen Square or the Colosseum in Rome. 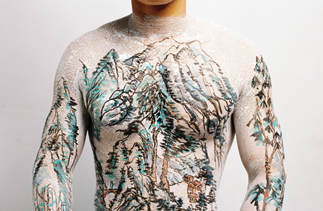 Here he is exhibiting an image from a 2001 performance, when he licked the ground in front of London’s Parliament building. His work uses one of the body’s most intimate parts “to communicate with nature.” Cang has also bathed with lizards and crawled on icy glaciers.
In a similar vein, Huang Yan in his “Chinese Shan-shui Tattoo” questions the connection between Chinese tradition and contemporary reality by painting traditional landscapes on the human body.
His concept is exciting because the painting shifts its form as the body moves.
Li Wei shows a photograph of himself with his head underground. This is intended as a modern portrait of contemporary people. Cui Xiuwen presents a series of images that explore the agony of modern Chinese women in a changing world.
“The exhibit illustrates the strength of contemporary Chinese art as an expression of pride about their culture and tradition in stark contrast to their earlier absorption in Western artistic traditions,” says Lee Jang-eun, the gallery’s curator.
Overall, the exhibit questions the validity of tradition and the loss of identity in modern-day China. Yet at the same time it is a stark reflection of the artists’ reality, not through the words of the West that others use to define their state, but through their own voices. This suggests that contemporary art in China is developing a stronger foundation.