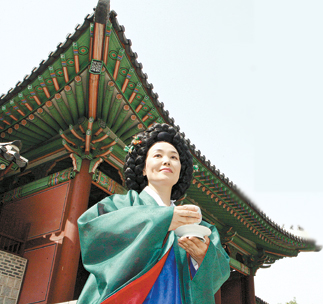 At the Gyeonghui Palace in downtown Seoul, on a sunny afternoon in late May, O Yang-ga, dressed in traditional royal hanbok, was conducting a tea ceremony. The ritual replicated the steps followed by a Joseon Dynasty king when he offered tea to an official emissary from China. The event was part of the annual celebration of the Federation of Korean Tea Masters, founded in 1979.
O, the president of Oyangga Tea Arts Academy, is the vice chairman of the federation. As O poured, some 500 members of the federation and their pupils were holding small tea parties nearby, showing-off their skills and their beautiful tea sets.
“Tea has played a significant role in Korean history,” O said. “It was served to eminent guests at royal palaces before alcoholic beverages, food or other entertainment,” O added. “Green tea from Mount Jiri was especially prized for such events.” The hot sweltering sun didn’t bother O, despite her heavy outfit. She said she just wanted to display the rich culture of Korean tea. Tea, particularly green tea, has been the center of O’s life. Now in her 50s, she has been studying tea for 25 years and still prefers the leaf-based beverage over coffee.
O said her entire family is devoted ― or addicted ― to tea. “We have no coffee pots and I hardly ever visit places like Starbucks,” she said. “I might occasionally drink coffee if someone bought me a cup, but I would never buy a cup with money from my own pocket.” O observed that her husband grew up in a conservative family that drank tea and her daughter is currently in China attending one of the most prestigious colleges that specialize in tea research. “I think she takes after me,” O said. “I used to take her to various tea ceremonies and research labs even when she was a toddler.”
This love for tea didn’t start suddenly. O said she has realized, as she grew older, that she became accustomed to the tea ceremony at a very young age. “My mother learned dado (the way of tea) when she attended Kyungbok Girls’ High School. She would always serve tea to guests. It was only later that I realized the way she served tea was called dado.”
Her relationship with tea didn’t stop there. When she was in college she met her husband, who was a medical student. “Raised in a rich and conservative family, my husband was taught to drink tea properly, by a Buddhist, monk who was close to his family,” O said. “When I met my husband I was a devout Christian.”
O added that when the couple began dating, drinking coffee at fancy Western restaurants was popular, but they would hang out at a traditional tea house. “Other than us, most of the patrons at the tea house would be old.” 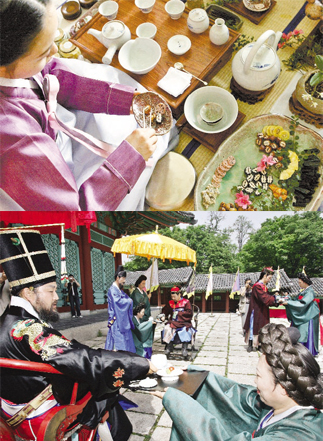 Top: Members of the Federation of Korean Tea Masters.Above: Members reenact a tea ceremony that Joseon Dynasty kings held for envoys from China. By Ahn Yoon-soo

Just after the couple married, O’s husband, who was fascinated by Korean culture, spent three months’ salary on a set of encyclopedias, some Korean white porcelain and jakseol tea, which is made from new leaves that have just sprouted.
O said she didn’t fight with her husband, even though he had spent a lot of money, because the items were things that she liked. She said at the time she had little knowledge of tea making.
The jakseol tea came with a small guide book. This was the start of many years of research.
Starting in 1985, not long after her son was born, O studied the art of tea brewing and culture. It was about this time that she converted to Buddhism, since there is a close relationship between the religion and tea.
“Tea is used as a meditation aid by Buddhist monks,” O said. “Priests drink coffee and monks drink tea, I think, so they can stay up and focus during meditation.”
She has written a doctoral thesis at Sungkyunkwan University in Seoul. “In the historical records are manuals on how the tea should be served,” she said. “They say how the tea should be placed and how it should be poured into the tea cup. However, the actual procedure for brewing tea and how the leaves should be prepared is missing,” O said. “Additionally many of the traditions of dado were lost during the Japanese colonial period. Many of the scholars in Korea went to Japan and learned Japanese tea art. “These eventually spread to Korea at the time. In the end, most of the tea art in Korea today is influenced by the Japanese practices.”
O said she has been seeking the authentic Korean tea traditions for 25 years. She said she has developed her own rituals by studying other traditional Korean arts including dance and theatrical performances, to find clues regarding what used to be practiced in Korea.
“The way the Japanese perform a tea ceremony and the way Koreans do it may look similar but they are different,” O said. “The little movements of the hands and the way the way the tea bowl is twisted and turned is different in every country. I have tried to find a unique Korean way of movement from other arts.”
O says that, so far, her main research finding is that Korean tea ceremonies are essentially feminine, while the Japanese version is masculine. “The tea culture was originally limited to the Japanese samurai,” O said. “Later it was practiced by women, but it still has the strong, bold movements of a man.”
O is a strong believer in widening the knowledge of tea by understanding tea cultures from China, India or England. However, she insists, such learning should be limited to theory and not bleed into practice.
“Many people when they study other tea cultures, tend to put them into practice,” O said. “They would try to replicate the way of brewing and pouring and drinking of another tea culture. I think this is wrong.” O argues that the primary goal in learning the tea arts from other countries is so that tea masters can improve the tea art of Korea. But emphasizing the tea art practiced in other countries, even though the principles of Korean tea art is incomplete, would in the long run harm Korea’s tea art as everything will be put into the mix. “We should not forget that our goal is purity,” she said.