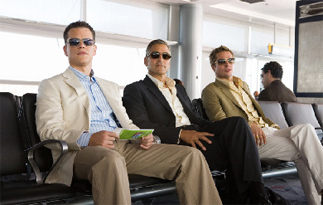 Matt Damon, George Clooney and Brad Pitt are just three of the cool cats off on their third big caper in “Ocean’s Thirteen.”

If there were mathematical rules governing moviemaking, Steven Soderbergh would be an anomaly.
Look at his career from a certain angle and he can be seen as an experimental filmmaker.
Here’s a director with roots in independent film, whose career started with the Palm d’Or at Cannes, and who’s stayed with his experimental streak with a serious biopic (“Kafka”), a weird dystopian non-linear comedy (“Schizopolis”) and most recently “Bubble,” a low-budget, non-scripted film using amateur actors that was released roughly simultaneously on TV, in theaters and on DVD. He’s also promised five more films in this mold.
Yet the same man is an A-list Hollywood success, most recently with “Ocean’s Eleven” and “The Good German.” Rarely has a filmmaker so committed to experimentation let his hair down so emphatically to dive into commercial movies.
And we’re better off for it. The latest reminder is “Ocean’s Thirteen.” If you’ve been keeping track, this is the summer’s fourth third movie and, in this case, the fourth third time is the charm.
The greatest ensemble caper cast ever is reassembled, minus Julia Roberts, for a return to Las Vegas. The grandfatherly figure of the crew, Reuben (Elliott Gould), attempts to go straight but gets double-crossed by hotel mogul Willie Bank (Al Pacino) and ends up an invalid. To take revenge, Danny (George Clooney) gathers his men to make sure Bank’s new casino won’t make enough profit to pay its backers, putting Reuben back in the driver’s seat.
Of course, things get outrageously complicated along the way, with the project eventually ballooning into an artificial earthquake, at least five different game rigging schemes, a labor riot in Mexico, a diamond heist and the deliberate torture of a hapless hotel reviewer.
Eventually Danny has to call on casino owner Terry Benedict (Andy Garcia), the antagonist from the first film, for money, and even the “Night Fox” (Vincent Cassel) from “Ocean’s Twelve” puts in a brief appearance.
True, there’s not much ― all right, anything new here, but the almost magical charisma these actors seem to spontaneously produce when they’re put together more than compensates. Pitt fans are likely to judge him underused, but Matt Damon does a wonderful turn disguised as a tight-lipped butler with a fake nose, out to seduce Bank’s assistant Abby (Ellen Barkin) and seize the diamonds. The role of a skilled thief among the experienced masters who just can’t manage to shake the image of the new kid is perfect for Damon, and his nervous energy here is harnessed for verve and laughs ― a sharp contrast to his recent turn in “The Good Shepherd.”
At the expense of perhaps inadequate screen time for Pitt and Clooney, the other members of the ensemble get a chance to shine ― and they don’t let us down. As he did in the first film, the acrobat Shaobo Qin steals every scene he’s in with his irritated, untranslated complaints in Chinese, Casey Affleck’s extraordinarily implausible role as a Mexican grassroots labor fighter ― armed with an even more implausible mustache ― is hilarious, and David Paymer is endearingly miserable as the jilted hotel reviewer.
Tying it all together is the same snappy, taut dialogue and light-hearted comedic flair that delighted summer filmgoers in the last two installments, combined with just a whiff of nostalgia for the Good Old Days of Vegas ― say, back when Sinatra, Dean Martin and Sammy Davis, Jr. were starring in the original “Eleven.”
Yes, film can be a serious artistic business, but it can also be flashy, delightful, unabashedly commercial entertainment ― Vegas is the perfect symbol of that. What a shame that Soderbergh’s one of the only art house directors to realize that filmgoers don’t necessarily want to spend 24 hours a day digging through the layers of a faux-real-faux docudrama or contemplating the implications of the media revolution. If only a few more of film’s aesthetic masters could get past their aversion to Hollywood and contribute, maybe filmgoers would be more eager to check out their Important Works ― and they’d be able to make our summer blockbusters that much better along the way.